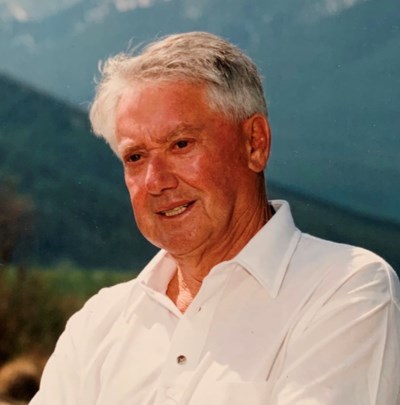 Jack was born in Hanna, Alberta May 26, 1926 and raised on a farm just outside of Dehlia, Alberta.  He learned very early the hard work of farming which served him well throughout his life.  As a young man, he learned the trade of butter making which he did in Hanna until joining the  Navy during WWII which took him around the world.

He was an avid sportsman, and he took every opportunity to play and to spectate.  Jack’s pitching arm was in high demand throughout the West, eventually taking him to Westlock, Alberta, where he met his wife, Betty Rimmer.  Together they settled in Calgary, later moving to Golden where he played baseball and worked as a parts manager in a service station there.  Jack and Betty later moved to Banff and leased the Star Service station from Shell.  Jack also became the Ford dealer in town, built an auto body shop, and later ran the Shell service station and community store in Lake Louise.

While Jack and Betty were busy raising their young family, they became avid community leaders.  Jack joined the Kinsmen, the Kiwanis, the curling and the golf club, serving as president in all.  He organized the Jr. Golf program and ran it for several years.  In 1988, Jack served as the chairman for the Alberta Winter Games, organizing and chairing the committee that brought the games to Banff.  He also spent years as president of Banff Minor Hockey as well as the Banff Ski Runner program.  Jack was a true gift to the youth of Banff and left a strong legacy as a sport builder in the community.

Jack was predeceased by his wife, Betty; their son, Murray; his parents, John and Mary Wilson; his sister and brother-in-law, Ruth and Dave Foxcroft; son-in-law, Dennis Rogers, and niece Kari Jones of California.

Jack served his family and community with passion and resolve.  He is well loved and respected for his community involvement, his passion for golf, and his ability to get things done.   He will be fondly remembered for his qui, this sense of humor, and his love for his family and friends.  He will be laid to rest with his beloved wife, Betty, and his son, Murray at the Mountain View Cemetery in Banff.

Condolences for the family may be extended at www.bowriverfuneral.com