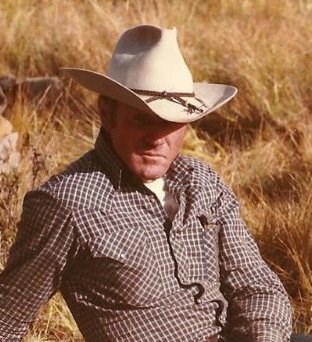 Jim Quinn passed away at Banff Mineral Springs hospital at the age of 82 years, after a long battle with cancer and congestive heart failure.  Due to the strict hospital policies in place to prevent the spread of Covid-19, sadly Jim’s wife Ruth and sister Irene could not be present with him when he passed.

Jim was well known in the Bow Valley horse community, and was an active member of the Banff Light Horse Association for many years.  Jim still owns the farm where he and his sister Irene grew up in the White Creek district, west of Bowden, AB. When growing up they rode horseback to the White Creek one room school which taught grades one to eight.  As a farm boy he learned to be a jack of all trades.  With a love for horses and animals, Jim’s first job, at age 13, came when a neighbor brought him young colts to start.

At the age of 16, Jim left the family farm to hitch hike to the mountains which were calling him.  Norman Luxton & Red Cathcart picked him up and he found work at  Martin’s  summer riding stables.  In the fall, he went to DeWinton to work for two thrashing crews, after which he drove truck without a driver’s license (he was too young for one), working on the twinning of highway #2 from Calgary to High River.  In the Spring,  he went back to work at Martin’s Stables and in the Fall/Winter he worked at the Douglas Lake Cattle Company, B.C.  The following year, he worked for Claude Brewster who was the horse outfitter for the Trail Riders of the Canadian Rockies which he did for many years, and also worked starting colts with Bill Bagley at Brewster Guest Ranch at Seebe, and he carried on at their company ranch in the Ghost Forestry where the horses wintered. Jim thought of Bill as the greatest horseman that he had ever known, and was a privilege to be his friend.

Other winters saw Jim travelling to Santa Barbara, California to the Polo fields to work with polo horses.  In spring 1963, Jim lived at Calgary Polo Grounds as manager and also worked part time at JB Cross’s Bar Pipe Hereford farm at DeWinton. That was when Jim met Ruth Ann Denbury, and they were married in December before leaving for Santa Barbara with Jim Cross’s polo ponies for the winter.  Jim missed the mountains, and in the Fall 1964 they moved to the Ya Ha Tinda, Banff National Park horse ranch, starting and training colts for the Warden Service.  In summer of 1966, he partnered into  Martin’s Dude Stables and in the fall, when the season was over, Jim went to work at The Banff Centre in the Physical Facilities Department. After training at SAIT, on July 27, 1973 Jim received his journeyman carpenter ticket. Eventually, Jim was Trades Supervisor, a position he held until his retirement in 2000.

In 1967, Jim leased from Parks Canada a horse corral which became the Banff Light Horse Association and he and Ruth remained active members for the rest of his life.  Over the years, he was a mentor to many riders who owe much to his experience and help.  Jim shod horses for people and took a one-year contract shoeing warden horses, in Banff, Yoho, and Kootenay Parks.  Holidays were touring  the backcountry with pack horses in National Parks, Kananaskis country, and the Forestry.  Jim also enjoyed fishing, especially Salmon fishing in Terrace and Kitimat, BC.

Jim is survived by his wife Ruth, sister Irene Martin, nieces Jennifer and Cheryl, nephew Kyle Martin, and cousins Denny & Barry Aldrich & Duane Quinn.  Jim always said that he was privileged to enjoy the beauty of Banff Park and the opportunity to travel where every place had its own special beauty. Jim made long time friends in all his travels.

“It is with great sadness that we say goodbye to Jim Quinn of corral #44.  A long standing

member of BLHA since 1967, Jim was an integral part of the club as well as sharing his extensive knowledge of horses to help other club members. Always lending a hand, he

will be greatly missed especially sitting at his corner, keeping watch.”

The family would like to extend their gratitude and appreciation to Jim’s Doctor Pinilla and the assistants at the Holy Cross Clinic in Calgary; to Banff 's Dr. Dino Smiljic and the Bear Street Clinic, and the Banff Mineral Springs Hospital doctors,  nurses and staff.

Depending on the status of Covid-19, a Celebration Of Life will hopefully be held late summer at Brewster’s Kananaskis Ranch at Seebe.

In lieu of flowers, the family asks that donations be made to STARS Air Ambulance Service or to a charity of your choice, in memory of Jim.