“Witnesses described that Corvette had pulled out to pass, and in a very short amount of time, went head-on with the other vehicle."
Sep 23, 2020 5:00 PM By: Chelsea Kemp 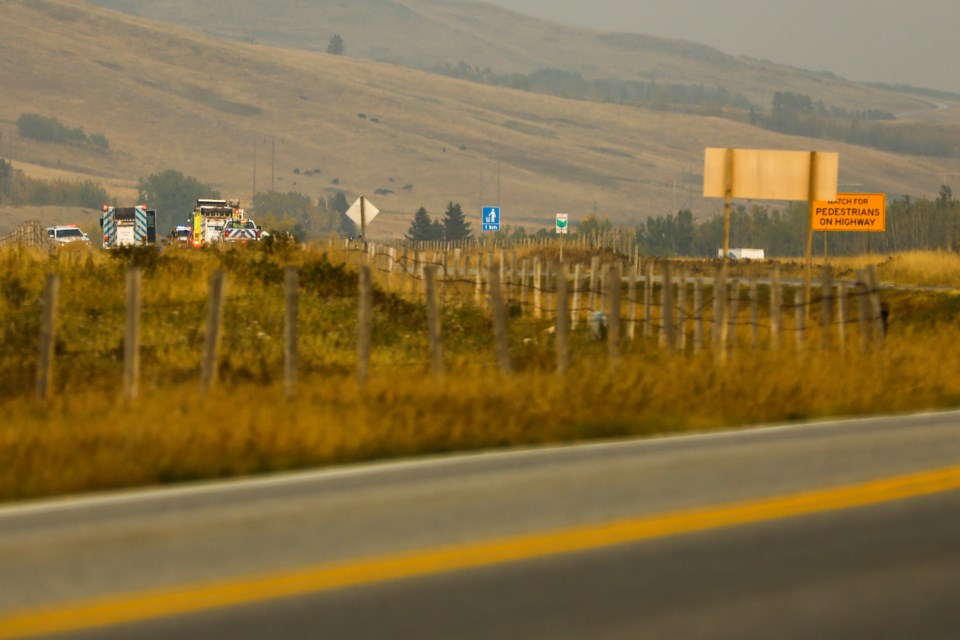 Emergency crews attend the scene of a fatal collision along the 1A Highway between Morley and Cochrane Friday afternoon (Sept. 18) The collision is under investigation by the Cochrane RCMP. EVAN BUHLER RMO PHOTO

BOW VALLEY– A fatal head-on collision along the 1A Highway between Morley and Cochrane Friday (Sept. 18) afternoon is under investigation by the Cochrane RCMP.

The initial investigation revealed a westbound red Corvette was attempting to pass slower-moving traffic on the road. When the Corvette entered the oncoming lane it struck a larger cube van headed east on the highway.

“Witnesses described that a Corvette had pulled out to pass and in a very short amount of time went head-on with the other vehicle,” Savinkoff said.

The 62-year-old man from Regina driving the Corvette was pronounced dead on the scene and the driver of the other vehicle was taken to the hospital for treatment. They are expected to recover.

The highway was blocked off for several hours so that an RCMP traffic analyst could measure the scene.

Alcohol and speed are not considered to be a factor in the collision at this time, Savinkoff said, but the investigation is ongoing.

The westbound area of the 1A highway is the worst stretch for fatal accidents in the Cochrane area, Savinkoff said, especially around the Chief Goodstoney Rodeo Centre.

Highway 1A has seen a steady increase in congestion heading west year-over-year, Savinkoff said. He added that 2020, in particular, has seen a steep increase in traffic from people going to several areas around Cochrane including the Rocky Mountains, McLean Creek and Cypress, which has also created issues with congestion and people following traffic laws.

Savinkoff said this has not directly correlated with an increase in collisions.

The roadways west of Cochrane do not have shoulders and can be very dangerous to pass on, Savinkoff said, noting there are limited areas with broken lines where it is safe to bypass slower moving vehicles.

“People always need to take extra care in those areas,” Savinkoff said. “If you get yourself in trouble and you misjudge the distance, there’s really not a lot of area to go and try and help out.”

He added drivers should also avoid passing multiple vehicles at once, and noted the 1A Highway can be an unforgiving road because of its steep turns and narrow roadways.

The planned widening of the 1A Highway will hopefully aid in helping to reduce accidents, Savinkoff said.

“It’s been proven that the narrower the roadway the more issues that can happen,” Savinkoff said. “There no escape route for vehicles if they do get into trouble. There’s no shoulders and a good stretch of that area has fairly steep ditches as well.”

In November 2019, Alberta Premier Jason Kenney announced $76.5 million had been earmarked in the Alberta Budget that year for the widening of Highway 1A to create a safer highway and promote Reconciliation.

The 29-kilometre stretch of Highway 1A that runs between Cochrane and Canmore through the Stoney Nakoda First Nation was set receive upgrades beginning in the spring of 2020. The project was expected to last two to three years.

The road will be doubled from 6.7 metres in width to 12 metres to allow shoulders on either side, the dips and hills of the highway will be smoothed out and some of the curves will be straightened in an effort to reduce collision rates and make the highway safer, while making the road a more efficient and enjoyable trip for travellers.

Savinkoff added any type of road improvements have a direct impact on traffic safety.

“When people are dealing with a lot of congestion people need to take their time," he said. "Don’t try to speed up your commute. You’re not really going to speed it up any further bypassing slower-moving vehicles.

"Stay in your lane and continue with the flow of traffic that’s always going to be your safest bet.”