Banff administration preparing information for council in event of discussion of mandatory mask laws at council's meeting on July 13
Jul 10, 2020 9:50 AM By: Cathy Ellis 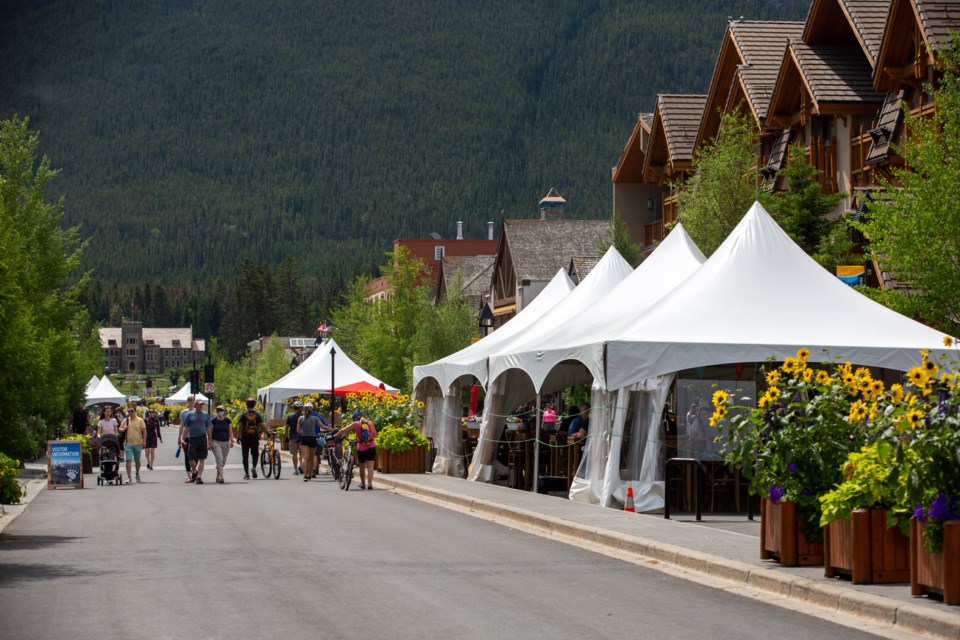 Large tents of restaurants and retailers have expanded their businesses onto Banff’s new downtown pedestrian zone along Banff Avenue June 25. Town of Banff officials say the planning and development department is processing upwards of 40 applications, two third of which are for cafés and restaurants and the rest for outdoor merchandising. EVAN BUHLER RMO PHOTO⁠

To deal with the influx of tourists, administration is pitching the idea to spend $30,000 for ambassadors to hand out about 100,000 masks to visitors who find it impossible to keep two metres away from each other now the tourist town is getting busy again.

Town of Banff officials say the number of visitors was considerably up last weekend compared to previous weeks, noting main entrance vehicle volumes were 23,170 on Saturday (July 5) – approaching the 24,000 threshold when congestion becomes a real problem.

“The downtown area within Banff was noticeably busier than it has been since the pandemic was declared, resulting in situations where physical distancing for those in certain areas downtown was difficult to navigate,” said Town Manager Kelly Gibson in a report prepared for council’s meeting next Monday (July 13).

“It was also observed that very few individuals were wearing masks, a tactic which has been strongly recommended by the chief medical officer of health when individuals can’t maintain physical distance from others not within their cohort.”

Toronto and Ottawa have made wearing masks mandatory, Montreal intends to go that way by the end of the month and Calgary Mayor Naheed Nenshi wants his city council to consider making face coverings compulsory if residents don’t voluntary do so.

In Banff, the decision on whether or not to explore mandatory mask wearing rests with town council since there is no longer a state of local emergency, or provincial public health emergency.

Discussion on the issue is likely to come up at council’s meeting on Monday.

Jason Darrah, the Town of Banff’s director of communications, said administration has been researching the authority and mechanisms for this, so they’re ready to provide information based on any requests or discussion from council.

“We won’t speculate on the direction they may want to go – mandatory or strong recommendation, inside-outside, in public locations or in private businesses,” he said.

The Town of Banff closed the 100 and 200 blocks of Banff Avenue and portion of Caribou Street to vehicles this summer until early September, which has made the space for pedestrians about 2.5 times bigger.

Recently, a freeze was put on additional outdoor restaurant or café seating in the pedestrian zone, in combination with reconfiguration of public landscaping, to prevent people clustering.

Earlier this week, the Town of Banff’s emergency coordination centre received confirmation the province is sending 100,000 masks to hand out to visitors within the townsite.

Previously, the municipality received 36,000 masks for distribution to residents, with an additional 72,000 expected mid-July for this same purpose. Another 150,000 masks are going to Roam, which is the first transit authority in Alberta to mandate face coverings beginning Monday (July 13).

“The ECC will continue to request that further access to masks for the proposed purpose of distributing to visitors be available to the Town of Banff as the summer progresses, as needed,” said Gibson.

Gibson said the COVID-19 safety ambassador the Town would like to hire would hand out masks during busier times, and educate the public on how to safely wear them.

“They would also function as the eyes and ears on the ground throughout the summer to relay issues with pedestrian traffic management to municipal enforcement,” he said.

“The primary focus would be on the downtown pedestrian areas, however they could also be assigned to other areas within the town site as needed.”

The money would come from the budget stabilization fund, and if approved by council, would leave a balance in that reserve of $352,000.

Regional visitation increasing as Banff swings into summer
Jun 26, 2020 11:00 AM