"Parks Canada has since received DNA lab results which confirm that the wolf involved in the Egypt Lake incident is the same wolf that was recently put down for exhibiting food conditioned behaviour near Sunshine Village."
Jul 21, 2020 5:26 PM By: Tanya Foubert 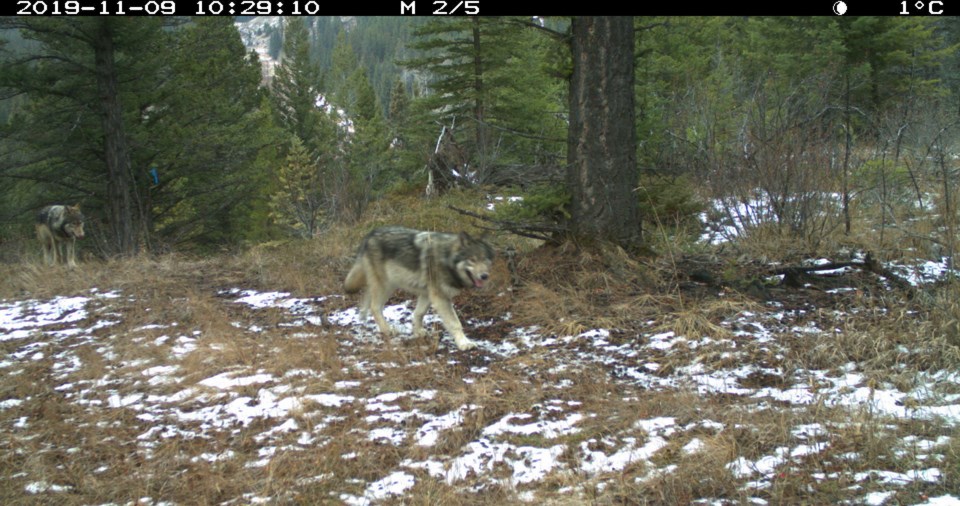 Members of the Bow Valley wolf pack are seen on a a remote camera. SUBMITTED IMAGE

BANFF NATIONAL PARK – Parks Canada has confirmed that a wolf destroyed after being seen entering buildings in the Sunshine Village area was also the one that entered tents in a backcountry campground in Banff National Park earlier this month.

Public relations and communications officer Justin Brisbane confirmed in a statement Tuesday (July 21) that a wolf reported at the beginning of the month to have entered two tents at Egypt Lake campground was the same animal killed by Parks Canada as a result of displaying food-conditioned behaviour near the ski hill.

"Parks Canada wildlife officials were able to collect wolf DNA evidence from the site for testing," Brisbane wrote in the statement. "Parks Canada has since received DNA lab results which confirm that the wolf involved in the Egypt Lake incident is the same wolf that was recently put down for exhibiting food conditioned behaviour near Sunshine Village."

A closure for the campgrounds in the Egypt Lake area has been lifted as a result.

Parks Canada was first made aware of a wolf displaying bold behaviour at the end of June in the area around Sunshine Village.

On July 5, Parks received a report of a wolf entering tents in the Egypt Lake campground.

On July 6, Parks staff witnessed a wolf entering a building and approaching people in the Sunshine Village area.

On July 7, Parks Canada issued a warning for a food conditioned wolf in the area of Egypt Lake Campground, Healy Creak Campground and Pharaoh Creek campgrounds. The warning soon turned into a closure for a wolf displaying bold behaviour and seeking human food.

Wildlife manager caught and collared a wolf in the Sunshine area and subsequently made the decision to destroy it on July 7. At the time, it was unclear if the wolf caught was the same one that entered the tents.

“Parks Canada wildlife officials determined the wolf was not a good candidate for rehabilitation, and therefore, humanely euthanized the wolf to ensure public safety,” Brisbane said in a statement at the time.

Also on July 7, a wolf warning went into place for the Banff townsite, Tunnel Mountain, Fairmont Banff Springs Golf Course, Minnewanka Loop, Cascade Ponds, and Johnson Lake. That warning was the result of multiple reports of a food conditioned wolf in and around the community.

On July 9, the wolf that had been seen in the Banff townsite area was also put down. The non-breeding female was found to be in poor health

“She had badly worn and damaged canine teeth and so this animal was no longer able to forage in the wild. Options for aversive conditioning, or relocation, would not be effective," said resource conservation manager for Banff National Park Bill Hunt at the time.

Neither of the wolves were believed to be members of the Bow Valley pack.

An adult female wolf was killed on the Trans-Canada Highway on June 10 in Yoho National Park and Parks is investigating a wolf killed on the highway near Banff from mid-June that was reported on July 14.

The pack as struggled with mortality related to human conflict. In 2016, two female members of the pack were killed by Parks after approaching people in the national park. One was the the alpha female at the time.

Earlier this year in May, the alpha male of the pack was killed on the Trans-Canada Highway. The current breeding female is the only surviving member of the former Bow Valley pack.

Food and garbage inside the park should always be secured and wolf sightings reported to 403-762-1470.

–with files from Cathy Ellis