“Matt literally threw his body in front of me and the boys, and fought the wolf as it ripped apart our tent and his arms and hands. We were screaming for help as he was fighting it and trying to save us, for what felt like an eternity."
0
Aug 14, 2019 3:45 PM By: Paul Clarke 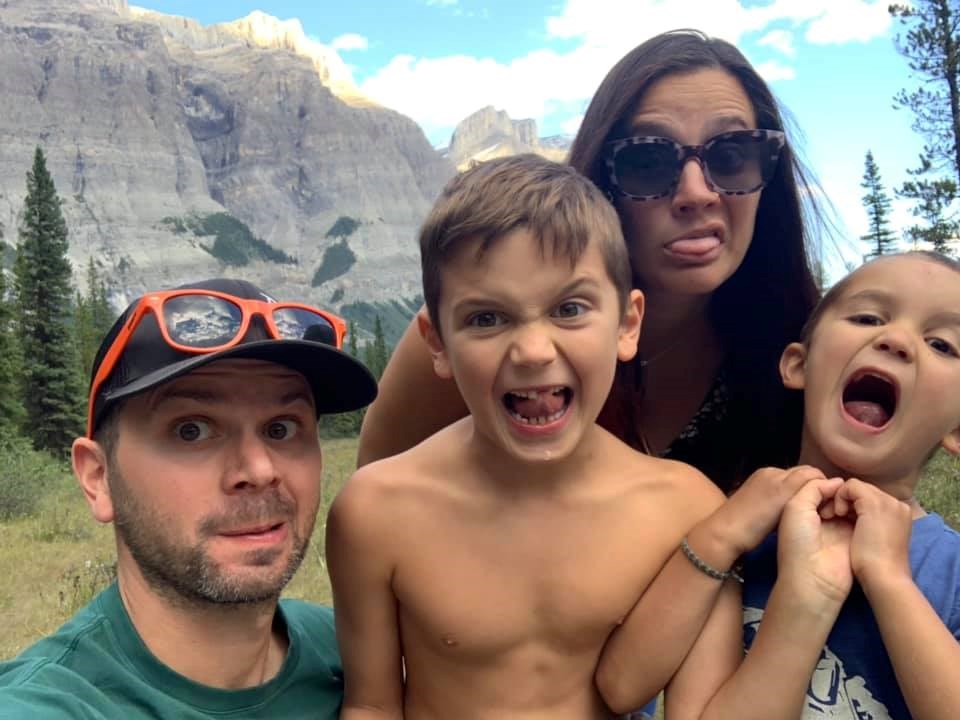 Elisa Rispoli was sleeping with her husband Matt and their two young boys in Rampart Creek Campground on Aug. 9 when they were woken by something sniffing and pawing outside their tent. FACEBOOK PHOTO

BANFF – The family that survived a rare wolf attack in Banff National Park last week described their ordeal as the worst night of their lives.

Elisa Rispoli said she was sleeping with her husband Matt and their two young boys in Rampart Creek Campground when they were woken by something sniffing and pawing outside their tent just after midnight on Aug. 9.

Unsure what it was, Matt pushed on the fabric of the tent to try and scare the animal away, but was suddenly bitten by a male wolf, tearing the tent apart.

“It was like something out of a horror movie. Matt literally threw his body in front of me and the boys, and fought the wolf as it ripped apart our tent and his arms and hands. We were screaming for help as he was fighting it and trying to save us, for what felt like an eternity [but I think was anywhere from one-to-three minutes]," wrote Rispoli, in a Facebook post.

“I laid my body on top of the kids and Matt pinned the wolf to the ground and held open its jaw with his hands, and the wolf started to drag Matt away, while I was pulling on his legs trying to get him back. I cannot and don’t think I’ll ever be able to properly describe the terror.”

She said a “guardian angel” from the tent site next to them heard their screams and threw a huge rock at the wolf before it finally let go of her husband and they were able to get inside a vehicle.

She said the rest of the night was a blur as they went to Banff Mineral Springs Hospital to take care of her husband’s puncture wounds and lacerations to his hands and arms. He was released from the hospital later that day.

“It could have been so so much worse, and we are just feeling so thankful that we are all still sitting here as a complete family,” wrote Rispoli.

“I love you Matthew – thank you for being our hero, a complete f-----g badass and for fighting with everything in you.”

According to Parks Canada, the federal agency received a report of the attack around 1 a.m. A wildlife specialist managed to locate the wolf about an hour later and killed it one kilometre south of the campground along Highway 93N.

“He got out of his vehicle and tried to get the attention of the wolf and it started to approach him, so given that behaviour he made the decision to destroy the animal with the thought that it was likely the animal involved in the incident,” said Jon Stuart-Smith, a wildlife management specialist.

“We collected evidence from the campsite and connected that to the genetics of the wolf that was destroyed and have confirmed that it was indeed the animal that was involved in the incident.”

According to Parks Canada, it’s the first wolf attack to occur in a national park.

“There have never been any attacks of people by wolves in a national park,” said Stuart-Smith, adding there have only been two reported wolf attacks in provincial parks in Canada.

“It is an unfortunate incident, but it is obviously very rare given the frequency of these types of incidents in North America.”

He said the wolf was not known to wildlife managers prior to the incident, and there were no reports of a wolf frequenting the campground, or the surrounding area, prior to the attack.

Parks Canada also said there were no significant wildlife attractants or food inside the tent, or in the immediate vicinity at the time.

The campground was reopened to the public on Monday (Aug. 12).

Parks Canada continues to ask that all park users in Banff, Lake Louise, Yoho and Kootenay National Parks use safe camping practices, obey all camping regulations, keep food and garbage secure at all times, and report wildlife sightings to Banff Dispatch at 403-762-1473.

Visitors and residents to the region can help reduce the chances of a human-wildlife conflict by keeping dogs on leash, not approaching wildlife and carrying bear spray.