“The good news is they both had life jackets on, which I think saved them because one of them got pinned under the log for – his guess was 15 seconds – before he managed to pull himself to the surface.”
Jun 24, 2020 6:51 AM By: Cathy Ellis 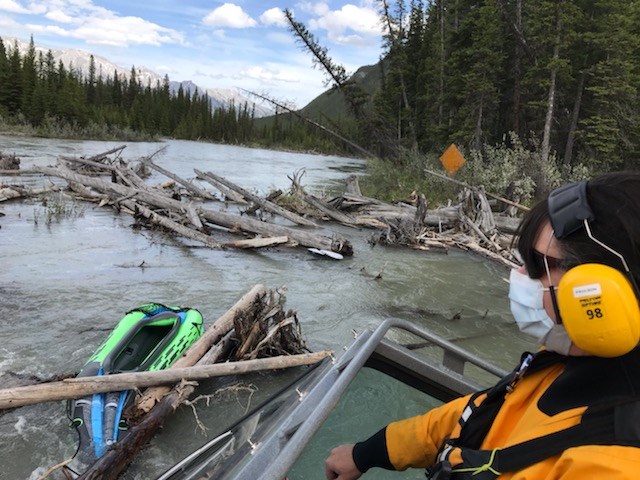 BOW VALLEY –  Rescuers have been kept busy over the past week plucking stranded paddlers from the Bow River, including one man who was pinned under water in Banff National Park and two kayakers who flipped downstream of Canmore.

In Banff, a 25-year-old man and a 30-year-old man in inflatable rafts were swept into a logjam downstream of the Banff Springs golf course on Monday afternoon (June 22) shortly after putting in.

“One of the men had no paddle and wasn’t able to steer and they crashed right into a logjam. They got trapped on the logjam and that popped their boat,” said Grant Statham, a Parks Canada visitor safety specialist for Banff, Yoho and Kootenay national parks.

“The good news is they both had life jackets on, which I think saved them because one of them got pinned under the log for – his guess was 15 seconds – before he managed to pull himself to the surface.”

The alarm was raised after the two men made it to an island in the river where they were able to yell for help. Using a jet boat, Parks Canada’s public safety rescue team was able to get the two men to safety.

Statham said the duo was luckily uninjured, but he warned the glacier-fed Bow River is extremely cold and spending any time in that water can quickly lead to hypothermia or even drowning.

“If you fall in that water you’ve got minutes before you can’t really move,” he said.

“It doesn’t take very long before you can’t actually pull yourself out of the water because you’re just too weak.”

Later that evening, two paddlers had a lucky escape after getting swept into a logjam and flipped their kayaks in the top part of the Three Sisters channel on the Bow River downstream of Canmore.

After one person capsized, KCPS rescuers say both paddlers abandoned their boats and were stuck on the logjam until they were plucked to safety by a jet boat.

“It was a fairly close call in terms of swimming in water above the log jam … it was definitely a near miss,” said Mike Koppang, a public safety specialist with KCPS, noting the pair was thankfully wearing personal flotation devices (PFDs).

“They were probably just out for what they thought was an evening paddle, but you need to be aware that the river here is a complex river at this time of year and things can go wrong quickly.”

At this time of year, the Bow River, and many others in the region, are running fast and high – and are quite muddy with runoff.

Rescuers say paddlers must be constantly aware of the potential for danger at every bend of the river.

“I think what they see out their front door they think it’s maybe like that all the time, but as soon as you go around the corner, you can’t see what’s on the other side of that,” said Koppang.

“The river is a dynamic piece of terrain and so you have to be thinking about river safety,” he added, noting it ins important to scout the river beforehand if unsure of conditions.

Canmore Fire-Rescue, which has a fully equipped swift water rescue team and works closely with KCPS, was the first to have its jet boat on the water Monday night.

“As soon as we got the call, we started mobilizing our jet boat and radioed Kananaskis Country Public Safety,” said Fire Chief Walter Gahler.

“It was determined we can get on the water quicker, so we got our boat in the water and responded with one Kananaskis public safety officer and two firefighters.”

Shortly after, a second jet boat was made available from KCPS, which responded with one public safety specialist and two more firefighters.

“The paddlers required no medical care, they were grateful for the service and understood the predicament they were in,” said Gahler.

“We view this very much as a close near miss. It was a very successful outcome, but it could have have been not nearly as positive.”

With floating the Bow River in Canmore, as well as from Banff to Canmore, becoming an increasingly popular local Canada Day tradition, rescuers want to urge paddlers to know the risks and plan according – and to stay away from cheap inflatable rafts and dinghies.

“What’s really common for us is people who are seasonal workers, they hop in their cheap toy dinghies and they float to Canmore,” said Statham, noting this doesn’t only occur on July 1.

“One rescue a few years ago, there was a couple of people who purchased the dinghy and they didn’t want to buy a paddle, so they used their flop fops. They went into a logjam and it burst their raft and we rescued them.”

While experienced paddlers are up to the task, rescuers want people less experienced to know the hazards and dangers on the Bow River.

“Even though the Bow River might seem like a classic grade two float to Canmore, it’s got quit a few hazards on it,” said Statham.

Wearing a life jacket or PFD remains the No. 1 recommendation for paddlers, but rescuers also advice that valuables such as cellphones be kept in a water-proof bags.

“If you do flip over and you lose your boat, you can still swim to shore or swim to an island, and you can still call for help,” said Statham.