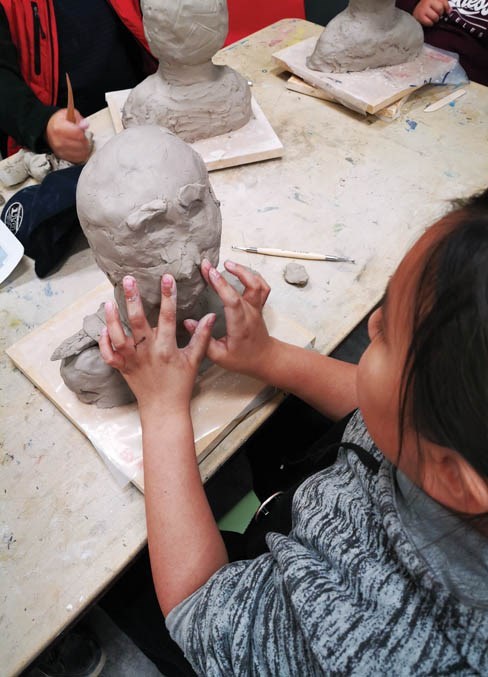 An example of the projects born through the CRPS and SEA partnership. Indigenous Grade 4 students from Exshaw School, sculpting bust of heroes from their family tree for the Stoney Nakoda Heroes project. Submitted/Photo credit: Kaitlyn Hoover.

EXSHAW – At possibly one of the biggest Canadian Rockies Public School board meetings this year, community members passionately expressed concerns over a possible closure of Exshaw School.

Tears filled the eyes of one community member, whom also volunteers at Exshaw School, as the board discussed a lack of communication from the federal government at its regular meeting on Tuesday (Oct. 15) after a possible $1.6 million shortfall was discovered within the 2020-21 budget.

“Let us help and keep this school open, it’s so emotional for me. I’ve been a volunteer for five years here,” said Carol Huston.

“I was stunned at the front page … There’s been so many things; the artwork at artsPlace, and the little Grade 2 boy … he just published a book and the artwork was so wonderful … I was just stunned.”

Superintendent Chris MacPhee said the board still has a “lot of fight left” when it comes to the fate of Exshaw School, with all board members agreeing closing it is the very last option.

“We’re just into that stage right now, we got lots of fight left in us, but its just where we direct it and at who right now because it’s been a ghost up until this point,” said MacPhee.

“We get a letter we’re finishing the agreement, it’s done at the end of this school year, here’s the dollar value you get next year­ – that’s all we got.”

CRPS identified a $1.6 million dollar shortfall in the new funding formula beginning September 2020 from the Department of Indigenous Services Canada (ISC) that would see student funding sent to Stoney Education Authority (SEA) under the new First Nations Control of First Nations Education initiative. The Exshaw School has had an agreement in place since 1973 to receive student funding directly from the feds.

Since the board received an email indicating the change in August, it has yet to receive any clarity as to what the next school year's funding will look like. Recently, however, the board has received word indicating the ISC would have a meeting with both the public board and the SEA in November.

Tuesday’s board meeting saw just under 30 people attend, including board members and CRPS staff. Exshaw School has been instrumental in its efforts to create one community between Exshaw and Morley, with a predominantly Stoney Nakoda population of roughly 99 per cent at the school, which has evidently been recognized by the community. In fact, two teachers are currently nominated for a Governor General's award for their innovative teaching ideas that saw students at the school learn a more in-depth history about their own family members.

“How they honour their traditions in this school, it’s just amazing,” said Huston.

“The caring to recognize it. The celebration just before school ends when the RCMP come and honour them, we’re all standing there together and honouring the teepee raising – it’s so wonderful to be acknowledging their traditions, their culture. We’re correcting something we didn’t do.”

MacPhee said the board is planning to hold two meetings in November, so community members from both affected communities are able to voice their concerns. Currently, the meetings are planned for Nov. 25 and 26, though that could change once details get worked out. Both would be held at the school itself in Exshaw.

While the board agreed it does not have enough information to make a decision on next steps yet, it also acknowledged that it has little time to come up with alternative plans, so must make some decision soon.

“I don’t see this board moving in any direction before we get more answers,” said board chair Carol Picard.

“You want us to make a hard decision – I can not stress enough how difficult this decision would be.”

MacPhee said while he knows it’s difficult, at some point a decision will have to be made.

In the meantime, the board continues to await communication from the ISC. Currently, the SEA is still in negotiations with the federal department on funding for education.