Things are heating up in the kitchen of Canmore’s Bow Valley BBQ with the local food manufacturing company working on a crowd-source investor campaign with ATB to support its newest initiative – the Bow Valley Copacking Collective.
0
Dec 21, 2016 12:00 AM By: Rocky Mountain Outlook 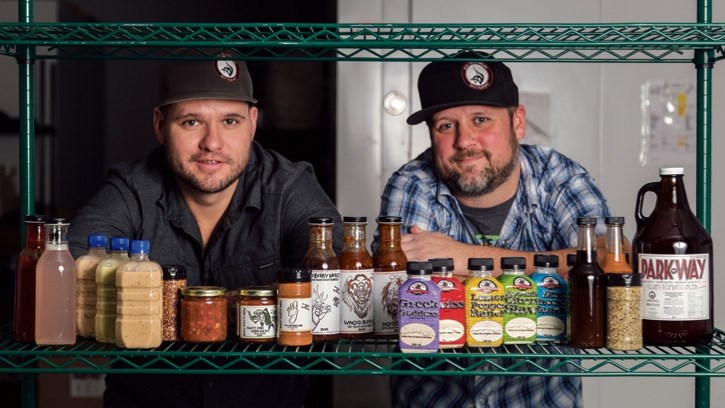 Bow Valley BBQ owner Jamie Ayles, left, along with operations manager Chris Dean show off some of the company’s products on Thursday (Dec. 8).

Things are heating up in the kitchen of Canmore’s Bow Valley BBQ with the local food manufacturing company working on a crowd-source investor campaign with ATB to support its newest initiative – the Bow Valley Copacking Collective.

Bow Valley BBQ owner Jamie Ayles said the local start-up has seen a lot of growth over the past year, going from a staff of two to 18 in that time.

The company is currently focused on expanding even more with the ATB Financial Boostr campaign – which is geared toward the Collective’s goal of purchasing new equipment to manufacture food products.

“We wanted to keep the ball rolling,” said Ayles on the crowd-funding campaign. “We wanted to start a collective because I remember how hard it was to get started and find those resources.

When BVBBQ began in 2012, Ayles and business partner Marie-Lyne Richard had to use the food manufacturing and development centre in Leduc to create the company’s products, scale them up for manufacturing and package them. The company used the facility to produce its sauces and spice rub for two years and stored the products in Cochrane.

But it was last year, when the company bought locally-grown salad dressing company Boccolino Grotto, which originally began in Canmore in 1987 as a restaurant, that locally producing products became a possibility.

Boccolino owners Ernie and Mary Heurlimann sought out the right owners for their food manufacturing business before they sold to Bow Valley BBQ.

Ayles was able to increase the capacity for his business after acquiring Boccolino and the light manufacturing and storage location that business had in Bow Meadows Crescent. The company has gone from two employees to 18 in a year and works with two major food manufacturing copacking partners – Amalino Foods and Apex Foods out of B.C.

“We had the opportunity to look at possibly buying Boccolino and everything worked out,” Ayles said. “We were able to take on Boccolino Grotto as a second generation owner and we inherited the plant and warehouse that went with it.

“From there, we launched some new products and expanded upon the brands as well.”

He said the collective has 15 clients that they make products for and package – as well as recipe development for restaurants and chefs in the valley interested in diversifying their business.

It is a big opportunity for locally produced products to expand or even begin. That’s something that interested Norm and Blake Flann, who, as co-owners of the newest restaurant in town, are definitely interested in the opportunity the copacking collective offers.

Blake’s on Bow Valley Trail celebrated its opening recently, but for some time Chef Blake Flann has been producing a Umami Ketchup that is definitely popular with his customers.

Flann said he is working with the Bow Valley Copacking Collective to develop the recipe for manufacturing and once it is ready it will be made in Canmore and sold at the restaurant.

“I was selling the ketchup at the old store for a really long time and we were just making it, bottling it and packaging it ourselves, which is extremely time consuming and labour intensive.”

Ayles approached both Flanns to see if they were interested in producing their product locally, which they were.

“Norm and I think it is a great idea, because they are local and they work with us closely,” said Flann, adding he thinks the future holds a lot of potential for the industry’s growth locally. “I think there is a (food manufacturing) sector here and it is going to keep growing. It will keep getting better and better.

“They will be able to work faster with the new equipment, so we will benefit from that too.”

Ayles is also keen to expand the production abilities his business currently has with the Boostr campaign. The Bow Valley Copacking Collective was one of six campaigns selected to present to investors in December as well.

The potential of a collective – or that Bow Valley BBQ has created – is also recognized by Dragon’s Den investor Arlene Dickinson – CEO of District Ventures based in Calgary. The business accelerator chooses what companies it works with and is the first accelerator for packaged goods in Canada. Bow Valley BBQ is among one of the three cohorts to receive mentorship and support. Other companies include Real Treat Kitchen out of Cochrane, Wild Team Kombucha, Drizzle and Light Cellar Super Foods.

The goal of the ATB Financial Boostr is to raise $10,000 for the collective and move toward development of a podcast program and purchase of new equipment. The podcast would feature food producers and chefs and be able to provide ideas and support for those looking into getting into food manufacturing – a growing industry in Alberta.

“Our goal with the Canmore Copacking Collective is to provide entry-level co-packing and development to small, scale start-up food processors, chefs, producers, and entrepreneurs,” Ayles wrote for the ATB campaign site. “We want to provide a service that allows existing products to be scaled up and formulated, or to develop products from a concept and then scale up and enter these products into new markets.

“This business model will allow these entities to commit to food processing and scale up without a major financial commitment, and within their desired volumes.”

As for how the collective fits into economic diversification for Canmore, it is uncertain because the municipality no longer has a contracted economic development officer or strategy that is being implemented in the community.

Canmore Business and Tourism was performing that function until July, when its board of directors announced it would cancel the contract to deliver economic development services.

Canmore’s municipally elected council has given no indication of what direction it would like to proceed when it comes to economic development and diversification in the community, but food manufacturing is an industry identified as in need of support.

A series of conversation cafes have been held over the past year looking at economic development for specific sectors like health and wellness and food manufacturing.

Stephanie O’Brien with Carmella Social Media and Event Management has been hosting the events as a supporter of collaborative work in the community. O’Brien said sectors are sharing information on things like transportation and logistics.

“This working group is already working together to reduce expenses and common hurdles,” she said, adding diversification is important for Canmore. “We do not want to find ourselves in a similar situation to Calgary, where we have put all our eggs in one basket. And while I am simplifying here, small business and entrepreneurial spirit are in no shortage in Canmore and should be at the forefront more often.

“When we support each other and work together, we all rise.”

Canmore residents might not be aware of how strong the industry in the valley already is – with more than Bow Valley BBQ, Boccolino Grotto and Ayle’s Caesar mix Parkway being available as locally made food.

Valbella Gourmet Foods has been manufacturing quality meats and specialty products in Canmore since 1978 with its 1,000 square foot manufacturing plant. Le Chocolatier is another well-known Canmore food manufacturer making waves in retail across Western Canada with distribution in Save-On-Foods as well.

Ayles would be happy to see more companies or chefs start their own lines of food products and manufacture them locally once developed. It is an industry that is seeing growth provincially and supported by the fact that Alberta has a strong agriculture industry – which provides the raw materials needed for food manufacturing.

“Getting into food manufacturing, we realized how much there is in Alberta as far as local produce, local ingredients and local resources,” Ayles said. “I think we are in a good time right now and at a good stage. One of the big things about the Copacking Collective is there are very few and far between resources out there for food manufacturing.”

Alberta, as a petroleum-based manufacturing economy, has for a long time put all its eggs in that one basket. With oil and gas no longer a favourite with the NDP government and with a focus on diversification, food manufacturing has become an area for targeted growth.

According to statistics from ATB Financial’s Todd Hirsch, food manufacturing is a $13.6 billion industry compared to the $9 billion it was in 2006.

The Legislative Assembly of Alberta’s standing committee on the province’s economic future began seeking input early in December on how to grow and diversity the agri-food and agribusiness sectors.

Identified as a value added industry – food manufacturing takes produce grown in the province and creates a new product for export or sale. For the most part, these businesses are small operations and an important sector of the entire economy, according to committee chair Graham Sucha.

“Agri-food and agribusinesses are important sectors in our province’s economy, and we look forward to hearing from the public on ways to strengthen and diversify these areas,” Sucha said.

To support Bow Valley BBQ’s ATB Financial Boostr campaign, go to www.atbboostr.ca for more information. The deadline to support the campaign is Jan. 5.

To provide input into the province’s standing committee process on agri-food manufacturing, go to www.assembly.ab.ca/committees/abeconomicfuture for more information. The deadline to submit is Jan. 15.