Determined, kind-hearted and generous is how Canmore’s much-loved May Riva is being remembered this week following her death Sunday, June 10 at the age of 94, just 22 days shy of her 95th birthday.
Jun 14, 2012 12:00 AM By: Rocky Mountain Outlook 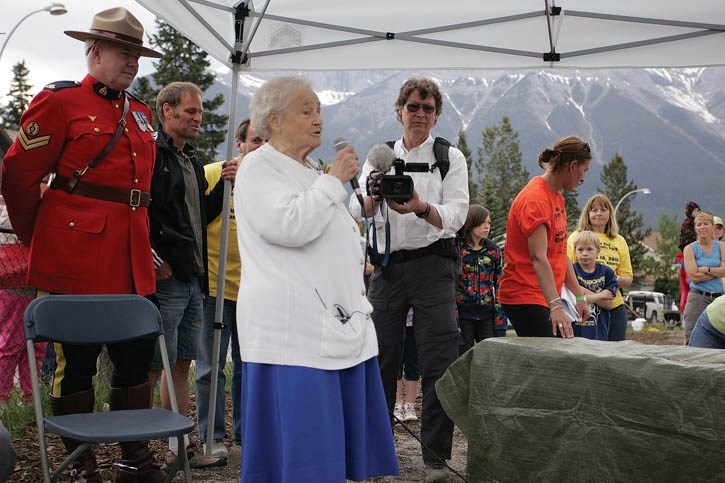 May Riva, who passed away on Sunday (June 10) shares her thoughts during the unveiling of the 2010 May Riva Community Park in Canmore.

Determined, kind-hearted and generous is how Canmore’s much-loved May Riva is being remembered this week following her death Sunday, June 10 at the age of 94, just 22 days shy of her 95th birthday.

A traditional Anglican service will be held for May, an active member of St. Michael’s Anglican Church, at the church Friday (June 15) at 1 p.m.

Betty Piwowar, St. Michael’s pastor, said Wednesday the service would have been what May would have grown up with, but it would still be a joyful ceremony, just as May – known for her sense of humour – would have wanted it.

“It was personality and her sense of humour, that was the thing that would stand out,” Piwowar said. “She was a doer.”

Gordie Miskow, the Canmore-born deputy mayor, said throughout her life May served as an example for others.

“To me, she’s the Mother Teresa of the Bow Valley. I’ve never seen anybody with her gumption, her life, her smile and her dedication to the community,” he said, adding that even as Canmore changed around her, she still had a smile on her face.

“When she left on Sunday she took a part of my heart away,” he said.

Doris Mary (May) Riva was born in Canmore on July 2, 1917 in her parents’ house on Main Street next to what is now the Good Earth Café. Her paternal grandparents, John and Francesca Riva, left Italy for Canmore in the 1890s, while her maternal grandparents, Alfred and Caroline Smedley, moved from Cheshire, England first to Banff and then to Canmore.

May’s parents, Doris and John Jr. Riva were married in the Oskaloosa Hotel, a boarding house for single miners that once stood on Mineside behind the Miner’s Court perpetually affordable housing complex.

May grew up in Canmore, often delivering baked goods for her grandfather, Alfred Smedley. During the Second World War, she enlisted in the Women’s Division, RCAF in 1942. May was posted to Transport Command in Toronto where she learned to drive, a skill that would come to serve as a cornerstone of her life.

After the war, May worked in Kamloops, Victoria and Penticton before returning to Canmore in 1956 to care for her mother.

Once back in Canmore, May took on jobs at Floyd Bray’s Mountain View Grocery Store, the telephone office and then the Rundle Mountain Trading Co. She also worked in Banff at the Banff Bakery and the Upper Hot Springs gift shop.

Finally, she accepted a job in 1975 as assistant matron at the Bow River Senior Citizens Lodge.

May retired in 1981 and moved into the lodge, where she lived for the next 31 years.

Through it all, serving the community as a volunteer was the other cornerstone of May’s life.

For her volunteer work, May has been awarded the Thérčse Casgrain Award, which the federal government uses to recognize outstanding Canadian women and the Town of Canmore’s Volunteer of the Year award and was also named Canmore’s Woman of the Year.

The International Association of Rebekah Assemblies presented May with its highest honour, the Decoration of Chivalry, in 1994 in recognition of May’s 50-plus years of service and her “selfless service to the community, her countless hours of volunteer work over and above what is expected of Rebekahs in their lodge work, and an acknowledgement of her efforts to make the world a better place to live.”

She was only one of six women in Alberta to receive that award.

In 2010 the community and school playground next to Elizabeth Rummel School was named the May Riva Community Park after installation of a new playground.

Along with the Rebekahs, May also volunteered with the Royal Canadian Legion Three Sisters Branch and Meals on Wheels.

In her familiar sedan, May was a familiar sight delivering meals, driving residents from the lodge to appointments or shop for groceries and tooling down the highway to the Heart Mountain Legion in Exshaw to partake in one of her favourite pastime: bingo.

It was there over the bingo tables that Bighorn librarian Rose Reid got to know May.

“May was a wonderful person to have a conservation with. She was funny, kind hearted and really involved with all of the different parts of the community.”

May also had a long association with St. Michael’s where every week she would take the church’s collection plate through the congregation.

And instead of shaking Piwowar’s hand at the end of a service, May would demand a hug.

“When she shared the peace, May always wanted a hug,” Piwowar said.

“She was a Canmore icon, but she was a St. Michael’s icon as well.”