Life on the Haig Glacier is a lot like the film The Martian – if Matt Damon’s character were also taking care of 25 athletic teenagers.
Sep 29, 2016 12:00 AM By: Rocky Mountain Outlook 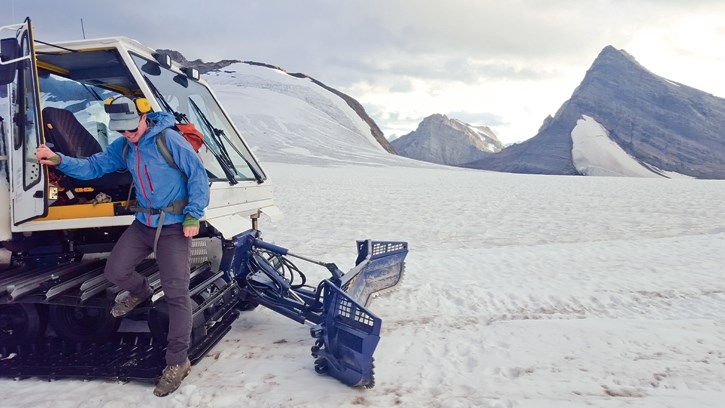 Darren Farley steps onto the Haig Glacier to begin his nightly grooming duties.

Life on the Haig Glacier is a lot like the film The Martian – if Matt Damon’s character were also taking care of 25 athletic teenagers.

Set in a vast and desolate landscape isolated from civilization, clean water, food and equipment matters are always top of mind. Ingenuity is required to keep the taps flowing, the solar panels operating and the toilets running. But the experience is infinitely memorable.

“I love being up here. I’ve been coming here since 2003 and every time I came here as an athlete, I thought it would be cool to work here,” said Kevin Sandau, a retired national cross country ski team athlete who just finished his first summer as a staffer at the Haig Glacier.

He said it’s no surprise The Martian has become the most-watched movie at the training centre.

“It’s very much similar. We even have the rover.”

The Beckie Scott High Performance Training Centre, referred to simply as The Haig, has been in operation since 1989. Chosen for its relatively safe, flat structure, virtually every Canadian high performance cross-country skier and biathlete has spent at least one training camp on its icy trails. It has been integral to the continued success of the national program. Sitting at 2,700 metres above sea level 22 kilometres from the nearest road, The Haig is one of the most spectacular spots in the Canadian Rockies.

The Haig is no posh backcountry resort, however, nor the domain of the weekend warrior. Anyone can conceivably stay there, but the atmosphere is one of high performance sport – reflected by the fact it is run by Winsport. The average age of attendees is between 15 and 20, mostly consist of skiers from across North America in search of on-snow high altitude training in the summer months.

“As a young skier, it was always something cool. For me, who grew up backpacking, it’s an awesome feeling arriving at the Haig. It can feel like home. Being here, meeting people for the first time, everyone usually enjoys themselves here,” Sandau said.

Space station analogies come to mind upon the approach. After the 20km hike beginning at Upper Kananaskis Lake, the vegetation disappears a kilometre past Turbine Canyon. Three white and silver space-aged structures come into view, shaded by solar panels and the imposing face of Mount Jellicoe. Propane cylinders, antennae and a helicopter landing pad are nestled between glacier-scraped rock, which today is obscured by elongated plumes of cloud, creeping like caterpillars across the limestone.

Inside, five-summer veteran Darrell Farley and Sandau run the show. Both are retired skiers, but at the Haig, they are also electricians, plumbers, cooks, cleaners, mechanics, Cat operators, first responders, glacier specialists and game show hosts.

“You can be good at those things, or really good at Googling them,” Farley said with a laugh. “If there is something we can’t figure out, we can get on the radio to Canmore or Calgary pretty fast.”

Every day for Farley and Sandau begins at 6 a.m., with a massive breakfast for athletes and coaches. Dietary needs are accommodated, and a parade of eggs, bacon, cereals and oatmeal emerge from the kitchen. After the meal, one staffer begins cleanup, lunch prep and checks on the showers and toilets. Waste is minimized as much as possible on the Haig, so the toilets burn everything they receive. The showers are also solar and propane-powered, and advancements in green technology have greatly improved the water temperature.

The other staffer will hike an hour up to the lip of the glacier with the skiers, snowmobile to the ski track, check equipment, and begin grooming. Many skiers want to be on the glacier as early as possible to maximize their time before the afternoon sun begins to turn the track to slush. Some ski for an hour, others for three or more. Focus is usually on technique, which can be hard considering the Haig is one of the most picturesque ski locations in the world.

Farley is the glacier guru at the Haig. He’s the one watching out for crevasses, moving the ski track and warning skiers about potential problems. The track is groomed twice a day, and the job takes about an hour and a half.

“Grooming is a fun part of the job. You get a good morning or evening, and you’re up there by yourself, it can be pretty peaceful,” Farley said. “The highlight is when you get a sunset after supper, and it’s just you and the glacier.”

On Mondays, once the morning grooming is done, a helicopter arrives with the latest food order, which arrives once a week. Often, national team athletes will take the helicopter in. Sandau said they spend about $1,500 a week to feed the camp.

There is never a lack of food, and drawers overflow with granola bars and Fig Newtons in between meals. On other days, after providing lunch, Farley and Sandau usually troubleshoot the various systems.

“Solar runs the water system, internet, television, radio and lights,” Farley said. “We used to use a lot more propane, but the solar has gotten better.”

The groomer is always a subject of conversation between coaches and staff. When it runs well, smooth classic and skate tracks are pressed into the snow, creating a loop that can measure anywhere from two to five kilometres. When the groomer is shot, the results are expensive. Once over the past summer, a mechanic had to be flown in twice to replace a part on the cat. The bill was easily over $2,000.

“Cat issues are the hardest to fix. It’s out of our domain,” Farley said.

The two are constantly doing their best to make the athletes feel at home. The Haig is a type of summer camp for many of its guests. It is the first exposure many have to a high performance camp and Sandau and Farley try to keep it light. They host movie nights and a mountain idol talent show each week.

After the food shipments are sorted, work on dinner begins. The menu is set a week ahead of time, but there is always room for some improvisation, and lots of fun – even if that involves cleaning toilets or doing dishes.

“You connect with them,” Sandau said. “If an athletes is scared or uncomfortable on the glacier, we want them to bring questions to us,” Sandau said.

Having quit skiing, Sandau likes to refer to the Haig as his Fortress of Solitude, where he’s secretly training for an incredible comeback. But the truth is he enjoys working hard alongside people who share his passion for skiing.

“I have never had a bad day up here. On some days, everything seems to work, and you get some more time off in the afternoon to go for a hike. On other days stuff doesn’t work, but the days go by so quick. I’m not Mr. Handyman, but this job helps you learn a lot of things, and there is always so much help.”

When the Haig was first constructed, it was the subject of some controversy. The environmental impacts of running a groomer three months a year on a glacier was a cause for concern. However, the alternative for Canadian skiers at the time was a $2,000 flight to New Zealand (plus food and accommodation), or no on-snow training.

Many ski coaches agree the Haig likely saved Canada’s national ski program and at $115 a night for room and board, it’s affordable for club teams. Several upgrades have been made to reduce its environmental footprint. A UV water system treats water from an underground spring. The cat is propane-powered to eliminate fuel spills (one of only a handful in the world), and solar power now means the propane generator only needs to run for an hour a day.

Still, international flights are often used. Every year, the ParaNordic ski team travels to New Zealand for a three-week camp at The Snow Farm, and this year, Biathlon Canada used its extra funds to join them. There, the skiers train at 300m above sea level on consistently firm snow, and no hour-long hike to the glacier.

Current climate models predict the glacier will disappear completely by 2080, and skiing on the glacier will end well before that. The Haig Glacier is truly a special place to visit, before it’s too late.