KANANASKIS – Eight plaques highlighting the Indigenous history of the Bow Valley were unveiled last week at various locations throughout the valley.
Jun 14, 2018 12:00 AM By: Rocky Mountain Outlook 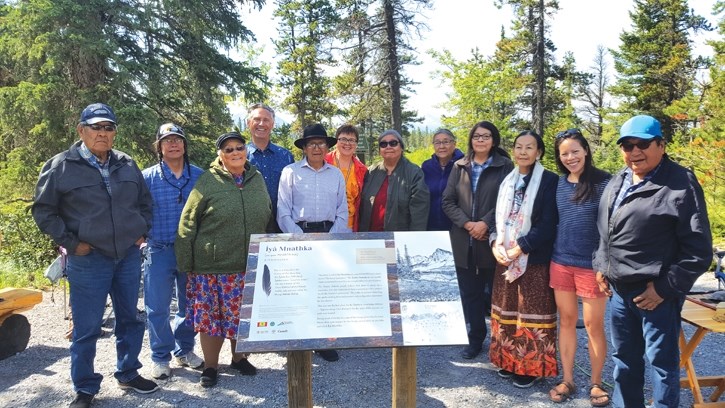 Elders from Stoney Nakoda First Nation were on hand for the unveiling of a plaque at the base of Îyâ Mnathka also know as Mount Yamnuska on Friday (June 8). The plaque is one of eight that were recently installed in places sacred to the Stoney Nakoda

KANANASKIS – Eight plaques highlighting the Indigenous history of the Bow Valley were unveiled last week at various locations throughout the valley.

Each plaque includes the Stoney name for the location and provides a brief history about the cultural significance of the location.

For example, the plaque at Mount Yamnuska explains to readers that in Stoney the mountain is called Îyâ Mnathka, which means “flat-faced mountain.”

According to the plaque, Stoney Nakoda people do not usually climb mountains because they are considered scared places.

In the event they do climb a mountain, they believe that prior to going up, it is important to have a ceremony with a prayer to ask for the Creator’s permission. This helps prevent disturbing the spirits residing there and ensures a safe and positive experience for the climber.

The area directly surrounding the mountain was also considered one of the best places to hunt bighorn sheep and strong winds at the top are a sign of the spirits who live there.

Rolland Rollimud, a Stoney elder and artist, explained the significance of the mountain and its surrounding area prior to unveiling the plaque.

“Mount E-Yamnusak is a mountain that is still respected by the Stoney Nation, so we never tried to climb it,” said Rollinmud, referring to the mountain by its proper name.

According to him, the moniker “Yamnuska” is actually incorrect and means messy hair in Stoney. To fix it, the new plaque states the name of the mountain is E-Yamnuska.

To make it a reality the MD of Bighorn worked closely with the Chiniki Elders Advisory Council to figure out which locations would be best.

The Banff Centre also played a role in designing the plaques and plans to incorporate each story into its Indigenous leadership training course.

There are also plans to install more signs in the near future.

“We’re hoping that these eight signs will be the beginning of being able to install more and more of them,” said Deb Grady, community services coordinator for the MD of Bighorn,

For her, the unveiling ceremony was an emotional moment.

“I think it’s important for all of us who live here to take the time to learn more about our Stoney neighbours. They’re gracious and friendly, but very quiet and retiring, unless you extend a hand of friendship,” said Grady, her voice shaking.

“They want to be our friends, they want to live and work with us, and we want to make this a better place for everybody.”