“Yes, we get to promote people and support local businesses … but in the end this a community experience and however you get to enjoy community, amongst a bunch of people you are sheltering in place with, [or] people you love and care for, far away."
May 14, 2020 1:58 PM By: Jenna Dulewich 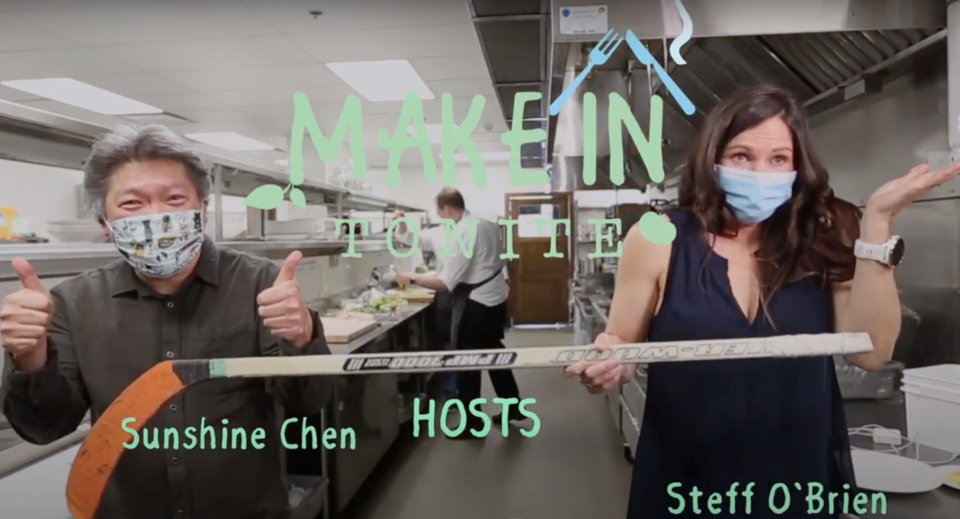 BOW VALLEY – If you have ever wanted to try an interactive cooking show from the comfort of your own home, now is the time.

Launched last month, Make In Tonite, is the brainchild of co-founders Sunshine Chen and Stephanie O’Brien, who wanted to feature Bow Valley chefs while giving people across the country (and world) the chance to follow along and make their own restaurant-style meals.

A twist on "takeout tonight," Chen said they wanted to create something for people who might lack the cooking skills, but now have the time to take on crafting a several course meal with the expertise of a Bow Valley chef.

“We played off ‘takeout’ – it’s an alternative but not make-out tonight, that is something you do on your own time,” Chen said with a laugh.

Operating on an interactive platform, Make In Tonite guests have the option to buy their own ingredients that are listed on the website ahead of time, or order an organic grocery box to be picked up from Rusticana Grocery in Canmore on Fridays.

“I’ve been thinking about it as an online community dinner party,” O’Brien said.

“It started as a conversation saying, you know, there are many calls to support restaurants, for example [with] takeout, but I don’t really know if people need fast and convenient food. So we looked at the opposite of takeout and said 'let's make in food.' ”

The first show kicked off with more than 50 participants tuned in to hosts, the Malcolm Hotel’s general manager Andrew Shepherd and executive chef Graham Smith, crafting chicken cacciatore on April 27. Participants made a three-course meal where there was also a surprise dish introduced part-way through to keep things exciting.

“A lot of people enjoyed themselves,” O’Brien said.

“It also gives people a chance to get a glimpse into how well and fast chefs cook … and it gave people an opportunity to up their game.”

Participants were also surprised with a mini dance party, where Dana Sekulich taught some popular TikTok dances for a move-your-body break.

“It’s just kind of what happens at a dinner party,” O’Brien said with a laugh.

“The idea was to connect with local restaurants and give them a different way to connect and reach out to their customers to showcase their chefs,” O’Brien said.

“We wanted to give the community time to spend together virtually … going back to something more normal.”

Chen echoed O’Brien’s sentiments, saying they have heard people say they are grateful to have the opportunity to cook with their partners or kids.

“Yes, we get to promote people and support local businesses … but in the end this a community experience and however you get to enjoy community, amongst a bunch of people you are sheltering in place with, [or] people you love and care for, far away,” Chen said.

Open to collaborations with local chefs, the founders said to get in touch through the Make In Tonite website, but noted they are taking a one week break to tweak the process.

“There is an incredible amount of goodwill and enthusiasm, which I see as something we really wanted to create – a creative process that brings people in,” Chen said.

Go to makeintonite.com for more information, or to RSVP for the May 22 show.

Cast pulls together for wavering The Hobbit, Much Ado About Nothing productions
Aug 13, 2020 2:00 PM