A first for Bow Valley housing is being regarded as an affordable option within pricey mountain communities.
Mar 16, 2017 12:00 AM By: Rocky Mountain Outlook 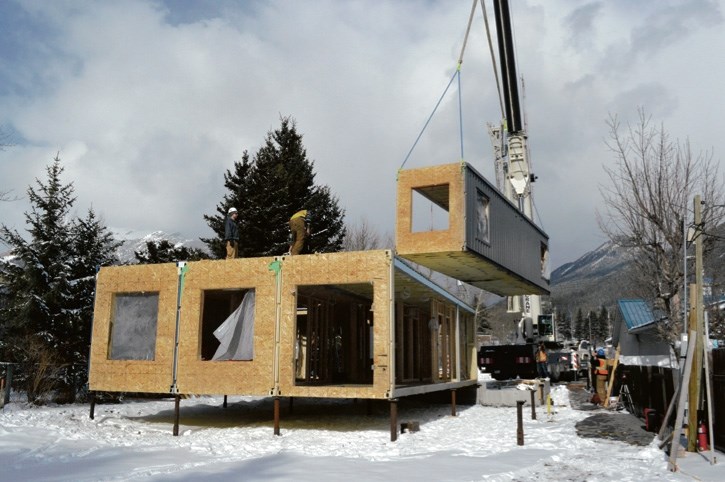 Clockwise from top: a sea can modular housing unit being installed in the community of Exshaw in February.

A first for Bow Valley housing is being regarded as an affordable option within pricey mountain communities.

As six sea can containers were lowered onto screw piles and locked into place this past February on a lot in Exshaw, there was curiosity as to what was springing up in the Municipal District of Bighorn hamlet.

The modular home, after all, is the first of its kind in the Bow Valley.

A single sea can, or shipping container, is a closed cell, high cube, steel structure of eight by 40 feet (320 square feet) that can carry up to 47,000 pounds.

Sea cans are one of the pieces in a building phase that could potentially lead to providing an affordable housing option in the Bow Valley, said Chuck Lemieux, owner and president of Blocks Container Structures, which put the modular house together.

“We get leads every day for reserves, towns, (and) MDs that are just looking for solutions,” said Lemieux.

At between $150-$200 a foot to get a nice product, plus soft costs, it is one of the reasons why the four-member family, whom didn’t wish to be named, is leaving the costly mountain town of Canmore for a new permanent home with a stick frame garage in Exshaw, about 15 kilometres east.

The affordability issue isn’t unique to just Canmore, though, as affordable housing is a critical challenge in the whole Bow Corridor, said MD Reeve Dene Cooper.

“None of our communities is without the challenge,” said Cooper. “It starts with residential lot costs and continues to the cost of the lock on the front door.

“Is this technology a contributor to affordable solutions? We will see. The modular option is being explored in many Alberta communities for residential and commercial applications.”

A big thing for affordable housing, said Lemieux, is the speed of construction.

With modular homes, building at an indoor facility year-round is an option, as other crews are able to simultaneously prepare other pieces to the process such as the foundation.

It “shortens the construction time by a good amount,” Lemieux said.

“If you need 1,000 units now, and it takes five years, then there’s just as much value in the fact that it’s done quickly,” said Lemieux. “This thing, when it’s done, it will be better insulated (spray foam) and stronger than any house and it’ll be done in six months, start to finish.”

Lemieux added the hybrid homes are made of recycled materials, and can have anything added on such as solar panels, or various designs of roofs.

“Some units we’ll bring to 90 per cent complete, other units we want it to be more of a permanent structure, so we’re doing all the rough-ins at the shop, the electrical, plumbing, and insulation,” said Lemieux.

There is the look of it, of course, or, better yet, what people picture in their minds when an odd-sounding sea can house is mentioned.

But Lemieux said the end product wouldn’t look like “a port in Vancouver.

“This home has a conventional feel to it. Because it is so new for people to think, Oh, it’s not going to look like a shipping yard, especially in the Bow Valley, where architectural guidelines are always a big issue,” said Lemieux.

You can do “anything and everything” with its features.

“A big thing with sea cans is it’s new to Canada … for this house, we got a draw mortgage from the bank, ATB financial is giving the draw mortgage for construction, so it’ll be the the first one locally that’s financed by a bank and it’s also new home warranty registered, so that’s another thing, you’re dealing with a product that is certified and inspected.”

A statistic Cooper found interesting came about during a review of Census Canada’s 2016 population statistics.

The nearby town of Cochrane has seen an increase of 8,273 persons, representing a 47 per cent increase since 2011.

“Where land is more available, housing is more affordable,” said Cooper. “Many of our communities in the Bow Valley are at or nearing being built out. Locally, we have a very steep challenge.”

The MD’s population dropped by seven people since 2011, which Cooper suspects were due to homes and lots lost to flooding in Exshaw, Lac Des Arcs and the Benchlands.