Wolves are formidable predators and they are taking advantage of abundant elk and deer to make a living on the fringes of the Banff townsite.
Oct 28, 2015 12:00 AM By: Rocky Mountain Outlook 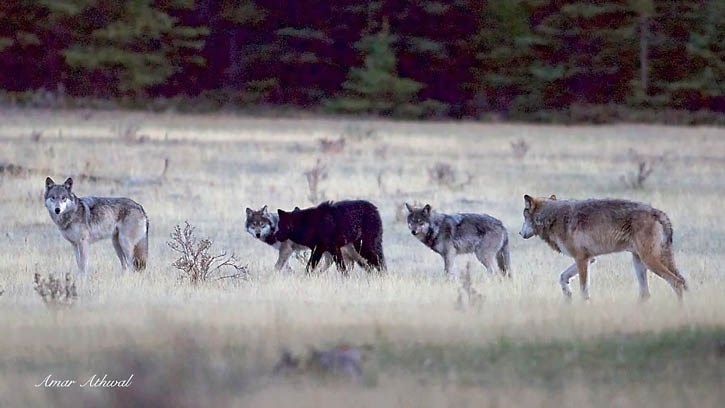 Five members of a new pack regularly seen around the Banff townsite.

Wolves are formidable predators and they are taking advantage of abundant elk and deer to make a living on the fringes of the Banff townsite.

Parks Canada is keeping track of all reported observations of a new wolf pack, and quickly responding to any reports of wolf kills, including closing off areas if necessary to keep people safe and give wolves security to feed.

“There has been continued activity with these wolves in the wildlife corridors surrounding the Town of Banff,” said Steve Michel, Parks Canada’s human-wildlife conflict specialist for Banff National Park.

“In the last few weeks, we’ve had sightings around the periphery of the townsite, the golf course, Tunnel Mountain, Cave and Basin, Sundance trail, Vermilion Lakes, Fenlands and a couple of days ago they came through around the back of the industrial compound.”

There are five members in the pack, likely two adults and three young of year. One is distinctly black while the others are varying shades of gray.

It is not known for sure where the wolves have come from, though Parks Canada speculates at least one of the wolves may be from the old Bow Valley pack that used to den along Bow Valley Parkway.

“We really don’t know where they came from and why they seem to be focused on utilizing habitat in this particular area,” said Michel.

“One of the adults might be previously part of the Bow Valley pack, which doesn’t appear to be here anymore, and perhaps dispersing members from Kootenay or another area,” he added.

“We do know distribution and abundance of wolves is always very dynamic. We suspect there’s probably a variety of reasons they’re here, and there’s obviously prey abundance of deer and elk.”

Wolves play a key role in keeping ecosystems healthy. They help keep deer and elk populations in check, which can benefit many other plant and animal species. The carcasses of their prey also help to redistribute nutrients and provide food for other wildlife species, like grizzly bears and scavengers.

Last month, a hiker came across four wolves feeding on an elk carcass on the banks of Forty Mile Creek, about 20 metres off the Fenlands Loops hiking trail, forcing Parks Canada to close the area for several days.

On Oct. 5, resource conservation officers got a report of wolves feeding on a mule deer along Sundance Canyon trail.

“By the time that it was reported, the mule deer carcass was basically completely consumed. The remnants were just removed,” said Michel, noting at this time of year they don’t want a grizzly bear to be attracted to the kill.

“The one at the Fenlands Trail was a very fresh kill, and we wanted to make sure the wolves had an opportunity to feed on it, so we closed off the area.”

Getting enough to eat is a full-time job for a wolf. To avoid using too much energy catching their food, wolves prey on weaker members of a herd, such as old, young or sick animals.

Wolves often rely on food they have cached after a successful hunt in order to see them through lean times.

Adult wolves can survive for days and even weeks without food if they have to. Growing pups, however, require regular nourishment in order to be strong enough to travel and hunt with the adults.

This is not the first time wolves have honed in on prey around the Banff townsite. The Fairholme wolf pack, which denned on the benchlands, put a dent in the elk population in the late 1990s and early 2000s.

Paul Paquet, one of the world’s leading wolf experts who has studied wolves in Banff National Park, said this pack is probably living off a kill for a week to 12 days.

“It could be more frequent. With a pack of that size, we’ve seen it as low as every six or eight days and as high as every 20 days,” he said.

“I think we calculated in Banff somewhere in the range that an individual wolf seemed to be requiring 12 or 13 elk annually,” he said.

Wolves have a natural fear of people and don’t typically pose a threat, but Paquet said he does worry the wolves near Banff will get too used to people.

“Regular and close contact where they become less inhibited around people … it always concerns me,” he said. “As they become accustomed to people, and become more active and visible, people tend to try and approach them,” he added.

“The real concern for wolves in Banff is that when they leave the park the tolerance for wolves outside the park is not good.”

Outside the parks, wolves are hunted and trapped, and even subject to government-approved culling in the name of protecting endangered caribou populations.

“It elevates the importance of national parks in protecting wolves given what’s happening outside the parks,” said Paquet.

“Even inside the parks, they have been victims of mortality with roads and railway, and that’s unfortunate. But people aren’t deliberately looking to kill wolves in the parks as they are outside the parks.”

Michel said this new wolf pack is not overly wary of people and development.

“They are using all areas in close proximity to people, often in in full daylight hours,” he said.

“From that standpoint, they have a degree of comfort with humans and human facilities, but certainly we haven’t had any situations of concern. They’re not approaching people and there’s been no problems with pets.”

That said, Michel said it’s a good reminder for people to keep dogs on a leash at all times, which is mandatory in national parks.

“There certainly could be potential for dogs coming into contact with wolves. Lots of people have pets and lots of people don’t have them on a leash,” he said.

“We want people to follow wildlife safety precautions – keep pets on a leash, carry bear spray and know how to use it and immediately report any observations of wolves or carcasses.”

Paquet said the wolf pack would likely remain in the area as long as there is enough food, but will also travel farther afield.

“Wolves like to move around and travel and they will continue to move about within their new territory – and those are extensive, somewhere around 1,000 square kilometres,” he said.

“My guess is they will be there fairly frequently as long as there’s a lot of elk there, also deer there.”

Banff’s resource conservation officers have not been able to intensively monitor the new pack as none of the wolves are collared or marked.

“Once we move into winter, we will be doing regular snow tracking as part of our transect monitoring,” said Michel. “That will give us some increased perspective on how the pack is using the corridors.”