New wolf pack may be forming in Banff

There’s a chance a new wolf pack may be taking up territory in Banff National Park following the demise of the Bow Valley’s last pack, while Canmore has seen a modest increase in wolf activity.
Nov 23, 2017 12:00 AM By: Rocky Mountain Outlook 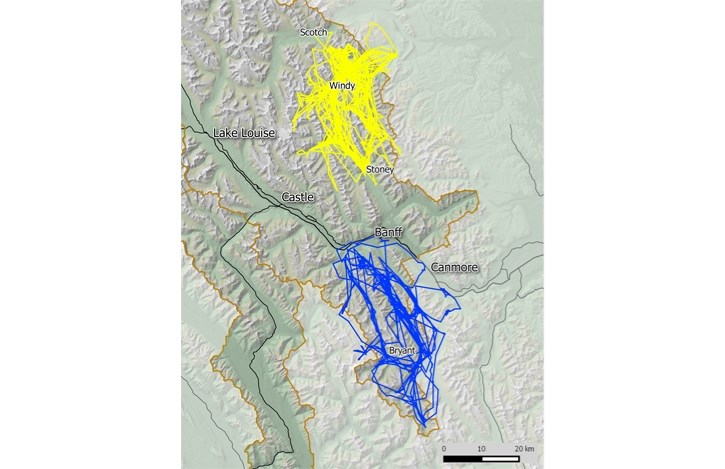 There’s a chance a new wolf pack may be taking up territory in Banff National Park following the demise of the Bow Valley’s last pack, while Canmore has seen a modest increase in wolf activity.

Three previously unknown wolves have been seen travelling together in the Castle Junction area of Banff and wildlife researchers are wondering if it may be the start of a new pack taking up the range of the former pack, or just making a foray from another area.

The breeding male of the former pack, a wolf known as No. 1501, fitted with a GPS collar, spent most of the summer with the Spray Valley pack and, more recently, has made appearances in Canmore and Banff.

“It’s quite a puzzle trying to find out what’s happening with different packs because their dynamics are always changing,” said Jesse Whittington, Parks Canada’s wildlife ecologist for Banff National Park.

“These wolves are fascinating to monitor and watch because their packs and movements are always changing and I’m always amazed at how far and wide they travel.”

Last winter, the Bow Valley pack consisted of alpha male 1501 and two offspring – a male, 1502, and female, 1701. The breeding female and a third young female wolf were shot and killed in summer 2016 when they became food conditioned and posed a potential threat to human safety.

In spring, data from 1502’s GPS collar showed he travelled more than 500 linear kilometres in about 15 days before he was shot and killed by a hunter in the Arrow Lakes area of B.C.

While there was speculation on whether 1501 would breed with his remaining daughter – which would be unusual, though not unheard of – he took off last spring and joined the Spray pack. His daughter, known as 1701, remains in the Bow Valley.

Whittington said they’ve been tracking 1501 through remote camera footage and data from his GPS collar, which downloads locations every two hours. This wolf first appeared in the Bow Valley in winter 2014-2015.

Last spring, data from 1501’s collar showed he had been travelling to and from an historic den in the Spray Valley, which evidence shows has been used as a den site on and off since the 1940s.

“He joined the Spray pack last spring and he’s stayed down in that neck of the woods for the whole summer,” said Whittington. “Our cameras suggest he’s been travelling with up to three other wolves. It’s a small pack of wolves roaming that area,” he added.

“The cameras have not yet picked up any sign of pups in that area, but they could have pups and we just haven’t detected them.”

In October, wolf 1501 was reported in areas around the Banff townsite, including the Banff Springs Golf Course and Vermilion Lakes area.

“He popped into the valley a few weeks ago and I was curious with the oncoming snow and the elk and deer moving to lower elevations, if he would stay in the Bow Valley, but he travelled far to the south end of the park again,” said Whittington.

But on Oct. 29, the male wolf came from Spray Lakes over Wind Pass east of Canmore into the Bow Valley. He spent several days in Wind Valley where it’s thought he made a kill based on a cluster of GPS locations.

Whittington said 1501 then came into the Bow Valley on Nov. 6 and, in less than two hours, had zoomed across the south side of Canmore, up Whiteman Pass and continued into Banff National Park.

“It’s amazing how far and wide these wolves travel,” he said. “They really do require huge territories and they cover pretty much their whole territory throughout the year.”

Young female wolf 1701, meanwhile, is still travelling alone throughout the Bow Valley, from Bow Valley Parkway to Carrot Creek. She’s fitted with a conventional VHF radio collar, meaning her signal can only be picked up when she’s in close range.

“I suspect during those times she was travelling into the backcountry and higher elevations. I don’t know where she went, but the Bow Valley pack typically ranges from Banff to Lake Louise and up to Bow Summit and surrounding valleys,” he said.

“In all of the observations of her this summer, she’s been travelling alone.”

Like her dead mother and sister, 1701 did show signs of habituation, but Whittington said she’s been very wary throughout summer.

“She has not been approaching people or campgrounds, which is great to see,” said Whittington.

“We first collared her last winter and since we’ve collared her she has not spent any time in high use areas.”

Whittington said none of the animals were 1701 because her collar showed she was in the Banff area at the time.

“We don’t know if those wolves made a foray into the Bow Valley from one of the surrounding packs – the Kootenay, Yoho or Red Deer packs – or if they’re staying,” he said.

“It will be interesting to see this winter whether or not those wolves stick around and make the Bow Valley their home or if they’ve wandered back where they originated from.”

John Paczkowski, an ecologist with the Parks Division of Alberta Environment and Parks, said remote cameras are picking up images of wolves around Canmore.

He said there have been eight records of wolves using the Stewart Creek wildlife underpass since Sept. 24.

“Some of these are the same individuals,” said Paczkowski, noting the most recent use was by 1501.

“We have also seen a modest rise in wolf activity around Canmore in the past few weeks based on incoming camera data.”

Wolves and other wide-roaming wildlife such as grizzly bears continue to show that the Yellowstone to Yukon (Y2Y) region is the scale needed to support animals’ need to roam freely.

Hillary Young, Alberta program manager for Y2Y, said she’s excited to hear of more wolves being spotted in the Bow Valley, but noted challenges wolves and other large carnivores have been facing remain the same.

“The Bow Valley is still a highly developed landscape and there’s more development proposed upslope in Canmore that would expand the footprint,” said Young, who has a background in ecology and conservation biology.

“For wolves, if we want to continue to have them travel through and even survive in the valley in the long-term, we need to make sure we give them space so they can continue to move freely without bumping up against infrastructure or people on trails.”

Parks Canada asks people to report sightings of wolves and other large carnivores to 403-762-1470.

“Wolves are such important predators in the ecosystem,” said Whittington. “We want to make sure we have wolves and large carnivores travelling through the main valleys.”