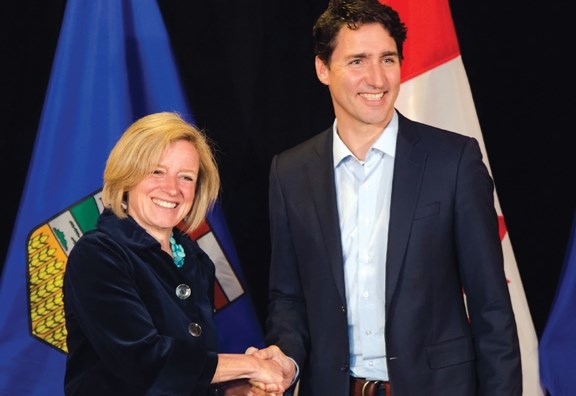 A day hike from the shrinking glaciers of Kananaskis and a stone’s throw from the flood ravaged golf course, Premier Rachel Notley ratcheted up the pitch for pipelines to Prime Minister Justin Trudeau and his federal Liberal cabinet, Sunday (April 25) at the Delta Kananaskis Lodge.

Notley, pushing the Energy East pipeline which would send tarsands oil to New Brunswick, and the expanded $6.8 billion westward bound Kinder Morgan Pipeline to Burnaby B.C., argued again that new pipelines are needed so Canadians can get a fair price for their product, and implement their climate change plan.

She received ‘no clear commitment’ from the federal government, but said that wasn’t the purpose of her presentation.

“I saw today as an opportunity to make Alberta’s case to the federal cabinet. Let’s make sure we get our facts right and make a compelling case. That’s what we came here to do,” Notley said. “I don’t think they fully understood the impact of our cap on emissions, the impact on greenhouse gas across the country with our (coal) phase out plan, or the breadth of our energy efficiency plan.”

As one of many speakers addressing the feds, Notley said she supplied a series of statistics demonstrating just how much Alberta contributes to the Canadian economy, while highlighting how the provincial climate change plan will reduce greenhouse gasses. She indicated both sides are generally “on the same page” but wanted to clarify the facts, noting there was a good and frank back and forth on the issues. Federal approval would be required for either pipeline project.

“I agree with the approach they are taking. Two Conservative governments, both at a federal and provincial level, came together to fail to get a pipeline approved. They paired that with a refusal to deal with climate change and the fact people distrusted the process in place,” said Notley.

“So the federal government has committed to improve the NEP process to earn the trust of Canadians, and I support that. With that in mind, they will hear our case, but won’t set out pre-judgements, as that would put us back to where we were before, and that’s not helpful.”

Premier Notley said she wasn’t barraged with a series of argumentative questions from the Liberals, but there were some points that needed clarification.

“The prime minister has said, generally speaking, there is a role to play for ensuring a safe energy infrastructure that supports the current industry in a sustainable way.

“Building pipelines does not have to mean we are quadrupling production or anything like that. It means we are engaging in an effective, efficient way that allows us the opportunity to choose our markets strategically so we get the best price for our product and reinvest that in the economy. Part of that investment is a move towards a more decarbonized future in the long term,” the premier said.

Minister of Natural Resources Jim Carr said the government “wants to move natural resources to tidewater” and are working on the pipeline question.

The federal Liberals will continue to meet until Tuesday (April 26) in Kananaskis.