Off leash dogs in and around Canmore's wildlife corridors 'alarming'

Despite the fact that human use is prohibited by law in wildlife corridors that sit on the edges of Town of Canmore, provincial land managers are seeing an “alarming” amount of human use and off-leash dogs.
Mar 16, 2017 12:00 AM By: Rocky Mountain Outlook 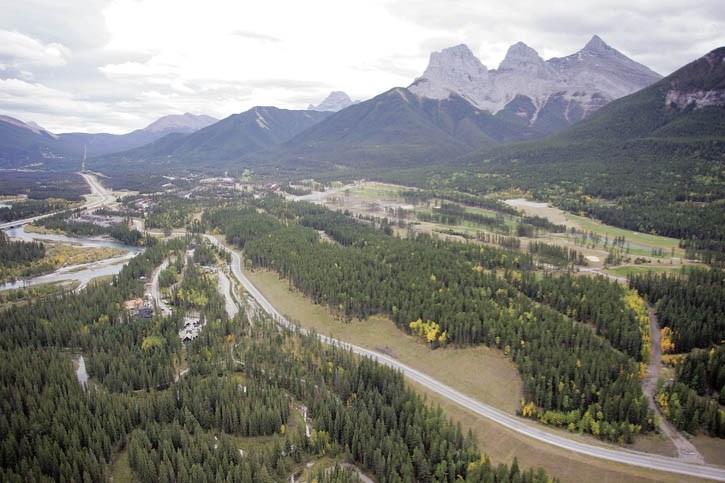 Wildlife managers in and around Canmore have undertaken a two year remote camera study to better understand how designated wildlife corridors are being used by people and animals.

Despite the fact that human use is prohibited by law in wildlife corridors that sit on the edges of Town of Canmore, provincial land managers are seeing an “alarming” amount of human use and off-leash dogs.

While a lot of community debate currently focuses around the design of wildlife corridors, it is the management of those areas after they are protected that is the purview of Alberta Environment and Parks staff that works in the Kananaskis Region.

AEP wildlife biologists Melanie Percy and John Paczkowski were at the Canadian Parks Conference in Banff last week to present interim results of a camera study they are undertaking in and around Canmore’s wildlife corridors.

The two-year study already has 18 months of camera data collected and Paczkowski said it came from 100 cameras placed on the landscape on human use trails, wildlife trails, inside and around wildlife corridors.

The results were alarming for Paczkowski, who said of the 1.5 million images collected, over 178,000 events were categorized and the data shows that 94 per cent of what is happening on the landscape is human use.

“I kind of expected it, but it is a little shocking when you start looking at those numbers,” he said, adding humans use the land 20 times more than wildlife. “The other thing we are seeing that is quite shocking was with humans they are often associated with dogs.”

He said of the 168,000 human use events caught on camera by the research study, 100,000 events involved people with dogs and of those, 60,000 were off-leash. Paczkowski said the interim results of the camera study are startling and alarming.

“There are more off leash dogs out there than on leash, it is really startling and up to 2,000 of those are in the wildlife corridors,” he said. “This is an exclamation point of something we should be addressing in the future if we want to maintain these wildlife corridors.”

While wildlife is the jurisdiction of the province, Percy said managing human use has to be approached through partnerships and the Town of Canmore began that collaborative process in 2014 with its human use management review process. She said the process resulted in seven recommendations ranging from enforcement to signage and, while an online survey showed relatively strong local knowledge of what a wildlife corridor is, most people didn’t actually know where they were.

Percy said the Bow Valley is a critical corridor for wildlife movement in the overall region, as the valley connects Banff National Park to the west to Kananaskis Country to the east, and ensuring species can navigate through that area is key to maintaining biodiversity.

“The take home message so far is this is great habitat for wildlife and they are using it, but we are also starting to see these subtle signs that they are not using it like they used to. There is a lot of human use that is spilling into the corridors and habitat patches, so we need to take more steps to ensure that we are still maintaining the functionality of this landscape for wildlife,” Percy said.

Paczkowski said the camera data collection aspect of the overall study will conclude in June, at which time Alberta Environment and Parks will do a lot more analysis of it, which should result in more detail around animal movement in and around corridors as well as human use.

Regardless, though, he said human use has to be having an influence on wildlife on the landscape and “it is really sort of alarming.”