They might be fierce and ferocious, but little is known about how wolverines are faring under climate changes and human development. Researchers like Nikki Heim want to change that.
Feb 12, 2015 12:00 AM By: Rocky Mountain Outlook 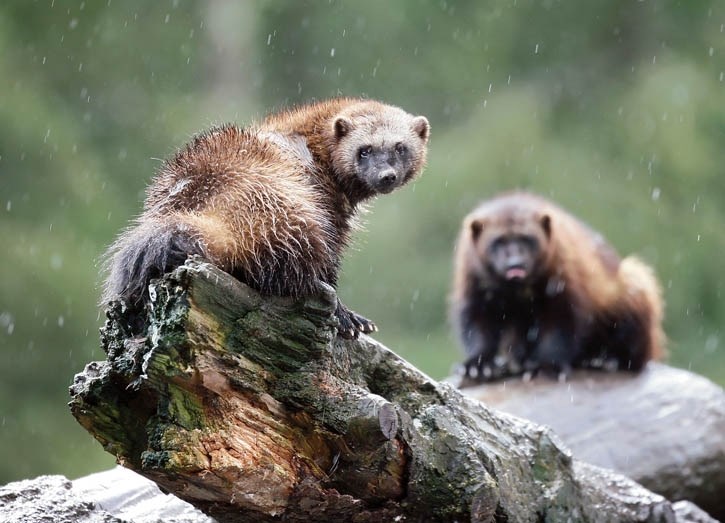 A pari of wolverines.

They might be fierce and ferocious, but little is known about how wolverines are faring under climate changes and human development.

“We know wolverine populations have declined over time, but we know very little about them,” said Heim at a recent Bow Valley Naturalists’ presentation. “Wolverines in Alberta are listed as ‘data deficient,’ so there’s still lots to learn about them.”

Heim, a Masters of Science student from the University of Victoria, is currently part of ongoing DNA research efforts to sample wolverines along the Rocky Mountains south to the U.S. border.

To sample wolverines, skinned beaver carcasses are nailed to trees and secured with wire, luring wolverines to climb the tree and leave a hair sample. Remote infrared cameras at each site also take thousands of photos of wolverine activity and behaviour.

DNA research identified 64 unique individual wolverines in Banff, Yoho and Kootenay national parks from 2010-13, while eight wolverines were detected in Kananaskis Country. These numbers, however, are not population estimates.

Heim said the DNA research is yielding good information, but she would love to get a GPS collar on a wolverine as she tries to understand how humans and other factors affect wolverine populations.

“If someone would let me collar a wolverine I would … I don’t like it because it is invasive and it is really hard on the animals and it’s stressful, but there are a lot of unanswered questions with this type of (DNA) data,” she said.

“You find wolverine at one point in space and time, but I don’t know how he got there, I don’t know what he navigated or avoided to get there, so it would be interesting to have more data. But, this is a pretty good start and it’s doesn’t require collaring animals.”

Wolverines are an enduring symbol of deep wilderness, dogged determination and fierce independence. They are the largest terrestrial member of the weasel family and are often mistaken by people for a small bear.

Their scientific name, Gulo, comes from the Latin word for glutton, and their appetite is legendary, but they typically eat no more than any other animal their size. It’s just that they aren’t particularly picky eaters.

Found throughout high elevation forests and well into harsh alpine, wolverines cover a phenomenal amount of territory, with some research indicating males may range over 3,000 square kilometres.

The animals naturally occur in low numbers and have low rates of reproduction.

“They are pretty similar to grizzly bears in their reproductive rates,” said Heim. “They can occupy the same home range as a grizzly bear … they are only about 30 pounds, so that’s pretty amazing.”

Limited research throughout the U.S. and Canada over the past two decades shows wolverines avoid human developed areas and prefer mountainous landscapes protected from human influence.

Locally, wolverines prefer more remote and mountainous areas located in the heart of Banff National Park. While wolverine numbers are higher within the national parks, only a few wolverines seem to persist just outside of these protected areas boundaries.

For example, remote camera images of unique wolverine fur patterns, found on their chests, found only one male to range throughout a vast area along the west side of Kananaskis Country.

Studies across a 12,000 sq km area included Banff, Kootenay and Yoho national parks, though some research work extended onto provincial lands west to Golden, B.C., as well as in Kananaskis Country.

In Banff, Yoho and Kootenay, 64 unique individuals – 25 females and 39 males – were identified through genetic analysis and four different wolverines were identified in Kananaskis through DNA analysis. Another four were identified by fur patterns on their chests.

Heim said wolverines also appeared to be more tentative in Kananaskis Country, compared to Banff, in approaching the sites and climbing trees to get to the beaver carcasses.

But, she said, in some cases remote cameras picked up wolverines and researchers were able to identify four more individuals – three in Kananaskis and one in the Ghost River region – based on their unique chest patterns.

“That bumped the number up to eight individuals. That’s a striking difference from within the national park … Kananaskis doesn’t change drastically. It’s still a rugged mountain topographic area,” she said.

Heim has been trying to find out why wolverine occurrence declines outside the parks.

She said factors that jump out as being important for wolverine persistence include dense conifer cover and persistent spring snow cover.

Linear industrial features like roads and seismic lines were negatively associated with wolverine occurrence, as were higher numbers of coyote and red fox, she said.

Heim said the Committee on the Status of Endangered Wildlife in Canada (COSEWIC) has assessed wolverine as a species of special concern because of increasing industrial activity and greater access to its remote habitats.

Wolverines have been subject to high levels of hunting and trapping.

They used to be one of the most widely distributed animals across Canada, with a range that covered all three territories, all of Western Canada, the Prairies, Ontario, Quebec, Labrador and New Brunswick.

In Alberta, the wolverine is officially ranked as a data deficient species, meaning there is little information.

COSEWIC has concluded this wide-ranging animal has an estimated Canadian population not likely exceeding 10,000 mature individuals and believes wolverines may have been extirpated from Vancouver Island.

The last reported sighting was in 1992.

“There are a few researchers that I know of … that would like to survey wolverines on the Island to see if we actually do have any on the Island anymore,” said Heim.

Regional wildfire assessment asked for prior to any development on TSMV lands
Apr 16, 2021 7:00 AM