The second appeal to stop the restoration project for the historic 142-year-old McDougall Church has been dismissed, but the province is still deciding whether or not to rescind the historic designation
Jun 17, 2020 4:00 PM By: Jenna Dulewich 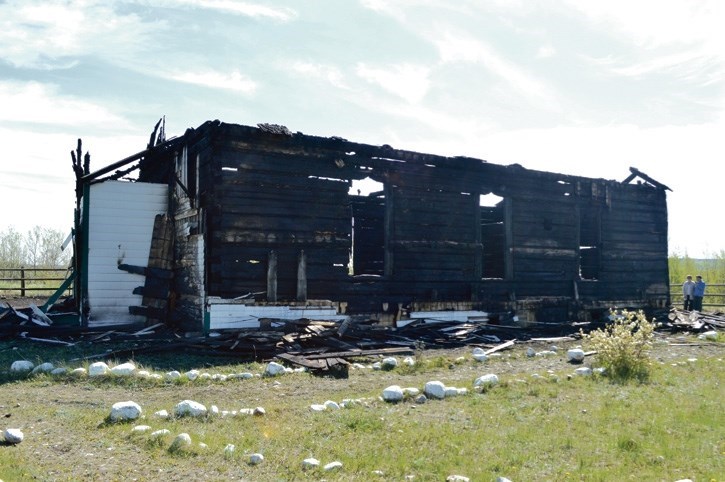 BIGHORN – The historic McDougall Church rebuild has jumped another hurdle on the way to restoration after an application to appeal the project was dismissed.

The rebuild of the 142-year-old historic church has been a rocky path ever since the 4 a.m. fire, which is still under investigation but has been deemed arson, burned the controversial building in May 2017.

"In my view, the applicants have not established that the [Subdivision and Development Appeal Board] erred or even possibly erred in its interpretation and application of the relevant definitions contained in the Land Use Bylaw and accordingly, the application for Permission to Appeal is dismissed," Judge Bruce McDonald wrote in his June 2 decision.

The Stoney Nakoda Nation filed an application to the Court of Appeal on the grounds the development permit came within the definition of "Places of Religious Assembly" under the Land Use Bylaw, but said it was neither permitted nor designated for use.

But the judge disagreed with the Nation as he dismissed the appeal.

"It does not appear upon a plain reading of the applicable Land Use Bylaw that the proposed development was not and could not be considered as falling within the definition of 'Places of Religious Assembly,' " the judge wrote.

This is the second appeal the Stoney Nakoda First Nation has filed this year.

The Nation first attempted to appeal to the MD of Bighorn Subdivision and Development Appeal Board (SDAB) in January.

In the original appeal letter, Nation officials said they opposed the rebuild as the site represented a painful symbolism of the original landmark with its ties to Residential Schools.

“The Stoney Nakoda people are not in favour of the construction of a replica or replacement of the church, which for many members will only serve to recast the shadow of a painful history,” the letter read.

SDAB dismissed the initial appeal in March on the grounds the majority of the issues raised were outside of the board's jurisdiction.

There were mixed reactions at the appeal board hearing where the board, made up of four members from the MD of Bighorn, heard support and opposition to the restoration project.

"There are a lot of things we are not aware of," Elder Margaret Rider said at the appeal hearing in the Bighorn council chambers.

"We were not aware what the objective is from leadership ... I know there is a lot of history with the McDougalls, and even though the United Church has apologized, the McDougall Society needs to work on apologizing and hearing the other side."

Other elders said they were in favour of the restoration as a way to "put [the history] behind and move past that."

At the hearing, McDougall Stoney Mission Society president Brenda McQueen said she had been attempting to connect with the Stoney tribal council for the past three years, to no avail.

"I have repeatedly tried to contact the Stoney Nakoda council and have yet to receive a single response," said an emotional McQueen at the hearing.

"I have asked the elders how to respond to the lack of response and they give me a little laugh ... any reasonable person would agree I have done everything I can to [connect]. Stoney Nakoda will not find a greater advocate on Reconciliation and telling the truth itself."

Acting Tribal CEO Ryan Robb said at this point they have exhausted all legal options.

"While we appreciate that some members may support or attend McDougall services, the official Stoney position is that we do not agree with the rebuilding of the church by the McDougall Society. This is evidenced by our opposition at every step (development permits, appeals, etc.)," Robb said in a statement.

While the SDAB denied the appeal and the Court of Appeal also denied the recent appeal, the Nation had also filed a letter to Alberta requesting the provincial historic designation be rescinded, arguing the history aspect of the designation is no longer valid. If the historic title were to be removed, a 2004 Option to Purchase Agreement between the Nation and McDougall Society would come into play, as it outlines the Stoney Nakoda Nation exclusive and irrevocable rights to purchase the land.

Stipulations include if "the lands no longer are the site of the McDougall Memorial United Church or any replica or replacement thereof, the construction of which has commenced and the lands no longer carry the designation of 'Provincial Historic Site' and the order stating same is discharged from the title to the lands.”

If that option was granted, the Stoney Nakoda Nation could purchase the land for $1.

“There is no formal process for evaluating requests to rescind a Provincial Historic Resource designation," wrote Danielle Murray, press secretary to the Office of the Minister of Cultural, Multiculturalism and Status of Women, in an email to the Outlook.

"In part, this is because these designations are intended to preserve highly significant historic places. Designations have historically only be rescinded when a resource has been profoundly compromised.”

The lawyer with the Nation said the Minister of Culture has yet to rule on the removal of the site's historic status.