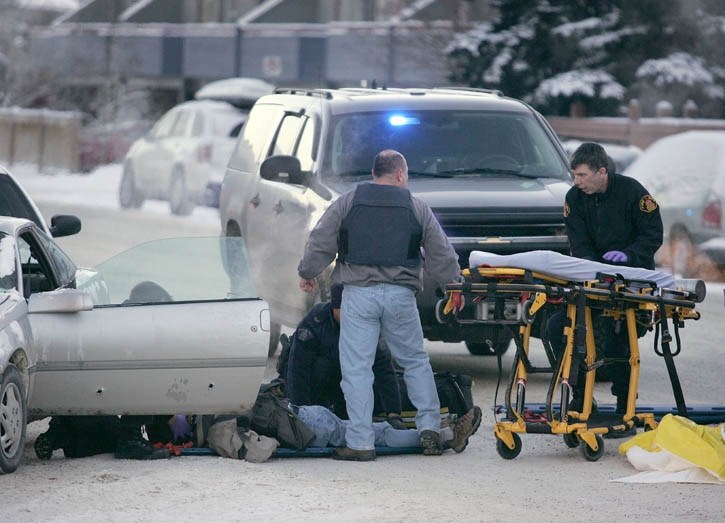 An armed robbery suspect is treated by EMS after being shot by Canmore RCMP in connection with three robberies in three days. Eyewitness accounts say the male fired two shots at police before they returned fire.

At about 4:20 p.m., RCMP stopped a grey Ford Probe on Railway Avenue in front of the Scotiabank branch following an armed robbery at a salon on Bow Valley Trail.

Sgt. Patrick Webb said officers saw the suspect driving the car but he did not stop until he was blocked in by a second police car.

“The Suspect presented a handgun in a threatening manner as he exited the vehicle,” Webb said. “The two RCMP officers then discharged their firearms at the suspect.”

He was treated at the scene by EMS and then taken to Canmore Hospital where he died of his injuries at approximately 5 p.m.

Alberta Serious Incident Response Team has taken over the investigation.

The suspect, however, cannot be identified at this time and an autopsy is planned for this week.

According to eyewitness Dr. Lloyd Evans, a man stepped out of the Probe, yelling, and fired a couple of shots to the rear of his car. An RCMP member then exited his patrol car and returned fire.

Apparently hit by the gunfire, the man landed face down on the pavement near the car, where he was eventually attended to by emergency services personnel and later removed from the scene by ambulance.

Evans said he was in the Safeway parking lot less than 50 metres from the scene. “The police stopped the guy, maybe they knew he was coming.

“I saw a guy (suspect) stop his car and then he jumped out. He was yelling and shot at a car behind him; two shots, I think. Then the cop got out and went around his car and fired maybe three shots.

RCMP quickly cordoned off the scene on Railway Avenue to investigate. In all, a dozen police vehicles were on scene, including a pair of dog units.

At the gunfire scene, German exchange students Max Gillis and Philip Schreiber, both 16, were at the nearby Starbucks when the vehicle was pulled over.

“I thought I heard a noise, but I didn’t know it was a gunshot,” Schreiber said.

Gillis added they saw the cops with their guns drawn, but did not realize what had happened until the man had been shot.

“We noticed how suddenly he was lying on the ground,” he said.

Staff at the Scotiabank branch said nobody in that office witnessed the shooting, but they heard the gunshots. Two other bystanders said they heard between five and eight shots fired.

The trio of robberies began on Saturday (Jan. 8) at the Sun Siesta tanning salon at 3:45 p.m.

The male suspect entered the business located on Sixth Avenue just off Main Street, producing a handgun and a paper bag to the employee.

He instructed her to give him the cash from the register, which she produced, and left the scene on foot.

A witness to the robbery, who asked to remain anonymous, said it happened quite fast.

“It went seriously fast,” she said. “He was in and out of there in less than a minute.”

The witness had been tanning and was finished when she returned to the entranceway of the salon.

“I came out and he was already standing at the front,” she said. “He turned to me, told me not to move, turned back to her, told her to put the money in the bag and left.”

Later that night, Canmore RCMP released a description of the suspect and a sketch put together by eyewitnesses.

On Sunday (Jan. 9) at 6 p.m., the Oak Barrel liquor store on Bow Valley Trail was robbed at gunpoint.

The suspect produced a paper bag and instructed the employee to give him the cash from the register, then had her enter the beer cooler before leaving.

The witness provided RCMP with a similar description to that of the suspect in the Sun Siesta robbery.

Surveillance footage from that robbery was released by RCMP Monday morning.