Wildlife experts in Banff were forced to euthanize a mule deer that failed to recover from the stress of getting entangled in heavy-duty rope and subsequent drugging and handling procedures. The big buck was put down on Wednesday (Oct. 2).
Oct 10, 2013 12:00 AM By: Rocky Mountain Outlook 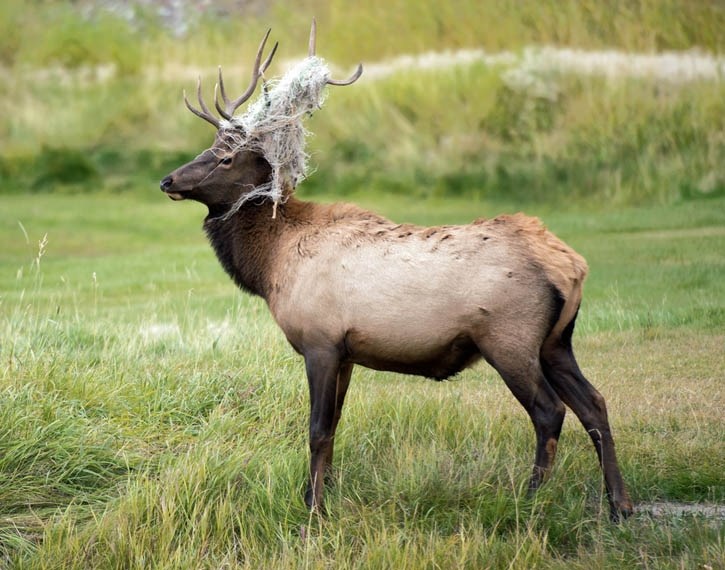 Wildlife experts in Banff were forced to euthanize a mule deer that failed to recover from the stress of getting entangled in heavy-duty rope and subsequent drugging and handling procedures.

The big buck was put down on Wednesday (Oct. 2). Just two days earlier, Parks Canada had to handle and chemically immobilize the animal because of its highly stressed and agitated state in order to get the rope off.

“We continued to monitor it on a frequent basis on Tuesday and Wednesday,” said Steve Michel, human-wildlife human conflict for Banff National Park.

“It was in obvious distress and there didn’t appear to be any possibility it was going to recover, so a decision was made to euthanize it.”

The drama began Sept. 30 when the large male mule deer was spotted in a residential neighbourhood on Beaver Street with about six metres of rope entangled in its antlers.

The rope then looped down and kept getting caught in the deer’s hooves, with one piece eventually tightening around its body and chafing one of its rear legs.

Because the animal was so highly stressed and panicked, Banff wildlife experts were forced to dart the animal twice later that day in order for it to be immobilized and have the rope removed.

Michel said an animal’s physiological functions are compromised during chemical immobilization but, if an animal is healthy, without disease and hasn’t undergone significant stress, the immobilization process is usually not a problem.

“However, in this case, there was extreme exertion and stress for the animal immediately prior to the immobilization event, and that’s when we can run into trouble,” said Michel.

Meanwhile, a bull elk has been seen around Banff this week with mesh netting entangled in its antlers – but wildlife officials have no plans to remove it at this stage.

“It’s not compromising its movements or mobility and there doesn’t appear to be any potential for it to entangle itself further,” said Michel.

“It looks fairly dramatic, but we don’t feel it will compromise its survival, so we don’t feel we need to intervene at the moment.”

Parks Canada reminds residents and businesses to check their properties for any potential hazards to elk and deer.

“We are pleading with residents to take a close look at their properties, whether it’s Christmas lights hanging low on a tree, mesh that’s protecting shrubs or gardens, or rope and dog leashes strung across yards,” said Michel.

“There’s a variety of different entanglement potentials, and we’re asking people to do their best and show respect for wildlife and try to clean those problems up.”