Banff was crazy busy this summer, but local authorities say public transit in the townsite and surrounding national park saved the day. The number of vehicles entering and exiting Banff in July and August was 1.
0
Oct 5, 2017 12:00 AM By: Rocky Mountain Outlook 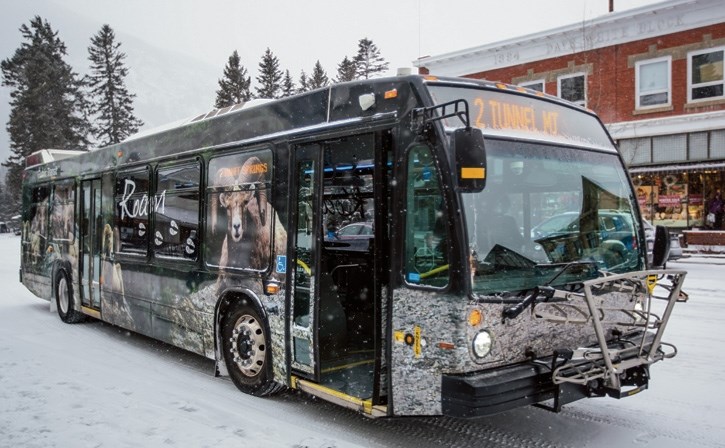 Roam transit will be rolling out free fares, half priced tickets and changed routes soon.

Banff was crazy busy this summer, but local authorities say public transit in the townsite and surrounding national park saved the day.

The number of vehicles entering and exiting Banff in July and August was 1.7 million, a seven per cent increase over the same period last year. Vehicle volumes are up 3.5 per cent overall year to date.

While there are complaints of Banff continuing to be overcrowded and traffic snarls and parking problems making it unpleasant for residents and tourists alike, local authorities say public transit played a big part in making a difference this summer.

Officials say about one million people have taken public transit this year, including the OnIt service from Calgary, Roam’s local and regional service, as well as Parks Canada’s new free bus options to Lake Louise and Minnewanka Loop.

“If you build it …” said Mayor Karen Sorensen at a recent council meeting.

Councillor Stavros Karlos praised town administration and Parks Canada for all the work done with additions to public bus transit in anticipation of throngs of tourists descending on the area with free entry to the park in 2017.

He pointed to the 280,000 people using the new Parks Canada transit options alone. In addition, more than 500,000 people used the local Roam routes in July and August.

“Chaos was averted. This summer, in my opinion, was a watershed moment for changes that will lead to a lasting impact for Banff National Park,” said Karlos. “I’m blown away by these numbers. I’m flabbergasted.”

According to the municipality’s data, Banff’s vehicle volumes have hit 4.6 million so far this year – a 21 per cent increase over daily vehicle counts in 2014. About 1.7 million of those were in summer.

The data also shows the number of days over Banff’s congestion threshold – at 24,000 vehicles per day when the road system is beyond capacity – were up from 49 to 60.

By manipulating the traffic light system with green overrides to move vehicles north-south along Banff Avenue, Bow River Bridge and Mountain Avenue, days with traffic delays greater than 15 minutes were down from 13 to five.

However, Field said, one of the limiting factors with green overrides is it can cause backups along Norquay Road toward the Trans-Canada Highway and slower east-west movements across town.

“Safety is our priority and we do have contingency plans to close down the Norquay entrance if we need to,” he said. “We didn’t have to do that this year, but that could be a vision of our future.”

In addition, the green overrides can hold up pedestrians wanting to cross the Buffalo Street-Banff Avenue intersection for up to four minutes.

“Every time a green override is run, this can create a negative experience for visitors and residents crossing the intersection on foot,” said Field.

Karlos warned the green overrides are not a long-term solution to Banff’s traffic troubles, noting it is only going to get worse as more and more visitors come to Banff.

“Green overrides are temporary solutions and I hope you all understand that,” he said to his council colleagues. “That system will break down eventually. We need to get cars off the road.”

Field said transit continues to be a big piece of the puzzle, noting ridership on Roam transit, including the three local Banff routes and the regional services, is up 19 per cent.

He said this indicates a mode shift towards public transit and away from personal vehicle use is occurring.

“This trend needs to continue in order to accommodate increased visitation without worsening vehicle congestion,” he said.

Karlos questioned what would have happened this summer had town council not taken several steps over the past four years to deal with traffic congestion and parking.

According to Parks Canada, Banff National Park has seen a four per cent increase this year to the end of August to 2.23 million visitors. That number is forecast to hit 4.25 million tourists by fiscal year end March 2018.

There’s been an average annual five per cent increase for the past few years.

He said that could have had something to do with a marketing campaign encouraging travel at different times of year as a way to manage expected increases with free park entry for Canada’s 150th.

(Waterton Lakes National Park recorded a 20 per cent increase so far this year. Before the Kenow wildfire, Waterton was so popular it was forced to close it gates due to high traffic volumes on the August long weekend.)

Danchuk said the Verdant Creek fire in Kootenay National Park and other wildfires in B.C – which kept the Bow Valley blanketed in smoke for much of summer – may have also played a part in that shift.

“Day use presented the most potential and that was the main reason for the increase in visitation,” he said, noting campgrounds were full.

Danchuk said Parks Canada plans to continue with transit into the future and is planning well ahead for 2018.

“We want to continue this most definitely and we are planning to do so,” he said.

“We’re assessing all the different routes, looking at capacity, the seasons, and looking at where else it could be helpful.”

Martin Bean, the commission’s chief administrative officer, said Banff Roam did not see repeated Mountain Avenue backups this summer compared to other years, noting there were fewer instances of extreme delays on route one.

“There are still challenges with summer congestion and schedule adherence,” said Bean.