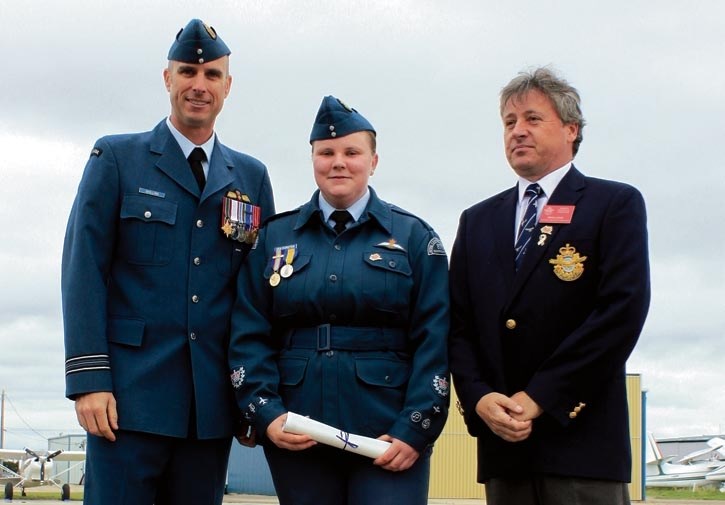 Van Dorsten completed a seven-week Private Pilot Scholarship this past summer in Saskatoon, Sask., along with eight other female cadets from around the Northwest Region (Alberta, Saskatchewan, Manitoba and the Northwest Territories).

The cadets received flying scholarships from the Air Cadet League of Canada in conjunction with the Department of National Defence after undertaking intensive training in meteorology, principles of flight, aero engines, theory of flight, airframes, air law and how to navigate, operate and fly solo in their aircraft.

“Becoming a pilot was an amazing experience,” said Van Dorsten. “Soaring up in the clouds was a dream that is now a reality. The hard work paid off immensely and I will be forever grateful to the Air Cadet League and the Canadian Cadet Organisations that I have the opportunity to fly.”

“This is what we do – we make dreams come true for the youth of Canada. They have an opportunity to step up and show us their dedication to achieving this goal, and we have the resources to make that happen for them,” said Air Cadet Sponsoring Committee Chair Bryan Scriven.

Cadets were chosen based on merit through an extensive evaluation process where they are graded against all other applicants in the Northwest Region. After participating in ground school for the training year, the cadets took the Transport Canada exam to qualify for the rest of the application process, which includes a panel interview, a narrative expressing their desire to participate in the scholarship and also having their volunteer activities and school grades assessed

After receiving their licence, cadets are encouraged to return and participate in flying familiarization with other cadets in their squadron by taking them up for a flight. These pilots will also aid with ground school training and aviation-related training such as meteorology and principles of flight at their local squadrons.

The Air Cadet League of Canada, Alberta Provincial Committee owns a fleet of six gliders and two tow planes which they use to facilitate familiarization flights for cadets across Alberta at four gliding centers.

Cadets are the largest government funded youth program in Canada with over 54,000 participants across Canada, with over 8,737 Air Cadets in the Northwest Region alone. Royal Canadian Air Cadets accepts youth between the ages of 12-18,s who have a desire to learn more about the air element of the Canadian Forces, wish to develop the attributes of leadership and good citizenship and who wish to promote physical fitness. There are no fees or costs to join Air Cadets and uniforms are supplied free of charge.

For more information on the Royal Canadian Air Cadets, please visit www.cadets.ca or contact the Squadron at cadets@878squadron.ca.