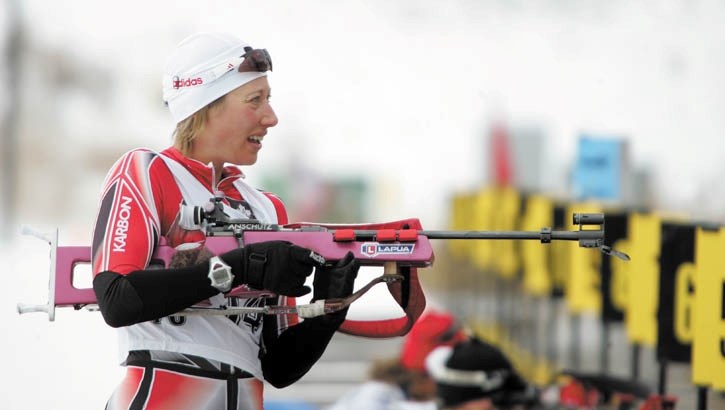 Zina Kocher will head to Europe to compete in biathlon world cup races.

The duo qualified thanks to strong combined performances at the national biathlon team trials, Monday and Tuesday (Nov. 14-15) at the Canmore Nordic Centre.

The trials are used to determine the starting lineup for Canada’s world cup biathlon team. This year, Biathlon Canada will switch athletes between the world cup and the IBU cup races more frequently.

They will join Megan Imrie on the world cup circuit next week. Imrie was pre-selected by the national team program in the spring.

Kocher cruised through the trials, finishing second in Monday’s sprint and third in Tuesday’s 12.5 kilometre sprint. Kocher altered her shooting routine, missing five of 20 targets in the process, but was still fast enough to finish on the podium.

“I wanted to risk it and really push myself today. I wouldn’t necessarily do that in a world cup, but today I was able to risk a bit more and see what the outcome would be, " Kocher said.

Long considered Canada’s fastest female biathlete, she was originally frustrated having to qualify for her world cup spot for the first time in years. However, she put in a strong summer of training and appears ready to take on the world’s best.

“I knew I just needed to have normal races and that’s what I did, " Kocher said. “I felt really awesome skiing and was able to push really hard. "

Crawford, Kocher and Imrie all finished within three seconds in the 12.5 km sprint.

Crawford needed a strong race Tuesday to earn the world cup berth after finishing sixth on the first day of trials. She battled with Melanie Schultz, Yolaine Oddou and 18-year-old Julia Ransom to snag the last spot on the team by shooting clean.

“I’m pretty excited. It was definitely my goal to get one of the spots. It’s a big relief, " Crawford said.

Her marksmanship was the story of the race for Crawford, as she shot 20 for 20 to win.

“I know this might sound corny, but I really believe in my shooting. I know I’m an excellent shooter and if I do what I do in training, I’ll perform well. "

Ransom proved to be the surprise of the time trials. After training this summer with the Biathlon Training Centre in Canmore, the 18-year-old Kelowna native finished fourth in the women’s 7.5 km sprint, good enough for fifth overall. She kept pace remarkably well with her bigger, stronger and more experienced teammates and credits training with the olympic veterans.

“Huge gains have been made in the last two months. I adore training with Zina and Mel Schultz and the older girls to have them there gives a pace marker. It definitely focuses you more – welcome to the big leagues, " Ransom said.

Training under Richard Boruta has also made a difference.

“Sunday I had a day of training. I missed my first three shots standing and Richard came right up to my face and said 'Be steady.’ It was a good reminder. "

She plans to race the next NorAm at the Canmore Nordic Centre on Dec. 3 and is taking her time splitting between biathlon and cross-country skiing. She’s in no rush to get to IBU cup races

“I want to first develop as an athlete and figure it out that way, " Ransom said.