When Mandy Johnson and her husband moved from downtown Canmore to the Peaks of Grassi neighbourhood perched high above Main Street, she was concerned she would be giving up her ability to walk or cycle to work. Knee surgery limited her mobility.
0
Nov 2, 2017 12:00 AM By: Rocky Mountain Outlook 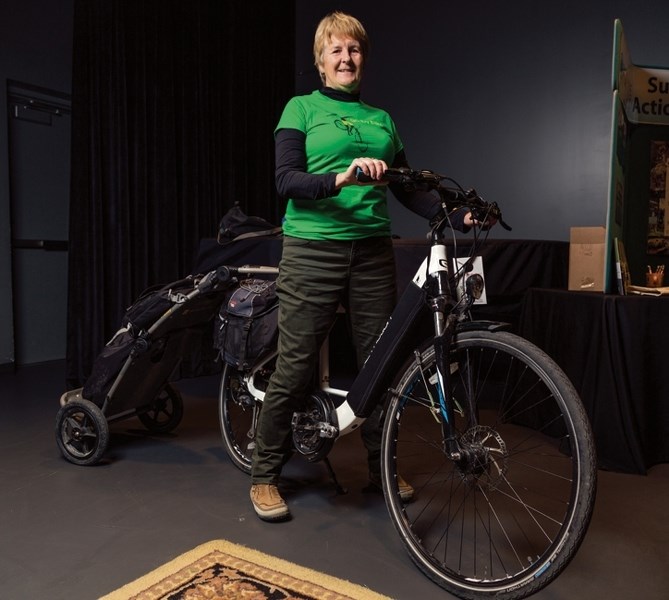 Mandy Johnson sits on her pedal assist electric bike at artsPlace in Canmore on Sunday (Oct. 29). The Biosphere Institute put on an afternoon of learning about e-bikes, helping valley residents learn the pros and cons of the alternative transportation source to gasoline vehicles. The bikes, which range from $2,000 to $5,000, can provide 100km of powered range and can turn a 30-minute hard hill climb into a 12-minute easy ride.

When Mandy Johnson and her husband moved from downtown Canmore to the Peaks of Grassi neighbourhood perched high above Main Street, she was concerned she would be giving up her ability to walk or cycle to work.

But once she discovered e-biking, her cycling life was reborn.

“I can reach my home at the top of Peaks of Grassi from downtown in 14 minutes. On a traditional bike, the ride takes an hour and a shower,” Johnson said Sunday during a Biosphere Institute of the Bow Valley e-bike information session at artsPlace. The crowd, made up mostly of retirees, was eager to learn more about the technology.

Johnson pushed the environmentally friendly aspects of the bike, stressing how her bike can take her up to 100 kilometres on a single charge. The bike allowed her to sell her car and still commute to work without an exhaust pipe.

“A typical mid-sized car costs about $10,000 a year to run, once you figure in fuel, insurance and maintenance,” Johnson said.

Much closer to a traditional bike than a motorcycle or scooter, e-bikes must be pedaled to move, and are usually equipped with speed-limiting governors, which limits speed to 32 km/h. Several models have come to market, costing upwards of $5,000, however, $400 kits are also available to convert traditional bikes to electric. Pedal assist motors kick in when required, and give a boost when needed. Most have adjustable assist levels.

“I have heard from a lot of people who thought they were through with cycling after a surgery, but this allows them to keep pedaling,” Johnson said. “It’s like getting a push up the hills.”

The Town of Canmore allows e-bikes on all roads and trails, but the system is a patchwork elsewhere. Parks Canada does not allow e-bikes on trails, including the Legacy Trail. Alberta Parks has banned them from parkland (including the Canmore Nordic Centre), but allows them on public lands. Every jurisdiction is reviewing its policy, including the Town of Banff, which could use e-bikes as another solution in its parking struggles debate.

Johnson said they are perfect commuter bikes for those living on slopes, and who can’t climb hills every day. The bikes are extremely popular in Europe, and make up more than half of bike sales.

Jeff Eamon, trails supervisor with Alberta Parks, said e-bikes have been a boon for trail builders. Alberta Parks received a grant to purchase four e-bikes and have put them to use.

“For four years we’ve used them on trails, clocking about 600 km a year, hauling chainsaws, loading them up with gas tanks for excavators, carrying bridge building tools. We’ve even hauled logs behind us,” Eamon said.

In many instances, the e-bikes have replaced quads. This allows trail builders to cut down fewer trees, and access remote trails more quickly.

“Access is the key. We can access places a lot faster than we used to. It’s not just speed, it’s expended energy,” Eamon said.

The e-bikes have also been used to monitor wildlife activity. Eamon said while assisting with a grizzly bear monitoring project, he managed to climb Jumping Pound hill in about 12 minutes. The climb takes about an hour on a regular bike.

“It’s a greener way to get there. You can ride a regular bike, but eventually you get tired. If you’re not just going for a ride, if you’re building trails, there comes a time you need efficiency. During flood surveying, it was great, because we didn’t have to cut every tree we came across on trail,” Eamon said.

There has been resistance to the technology. Johnson said road bikers occasionally accost her on Three Sisters Parkway, as she passes them on uphills.

“When I tell them this is my car, they are usually good with that,” Johnson said.

Yet while commuting is relatively benign, mountain bike e-bikes are creating more debate. IMBA (International Mountain Bike Association) released a study in 2015 which determined mountain e-bikes do not damage trails more than regular mountain bikes, but came out with a carefully worded response, which supports class 1 e-MTB access to non-motorized trails when the land management agency, in consultation with local mountain bikers, deems them appropriate, and doesn’t reduce access to non-motorized bikes.

CAMBA (Canmore and area mountain bike alliance) currently has no formal policy on e-bikes, although the Mountain Bike Tourism Symposium in Revelstoke recently ended its 2017 conference with a debate on the technology, debating if motors are the ‘line in the sand’ for trails.

Eamon said he’s seeing more and more e-bikes in West Bragg Creek, and the Tom Snow trail has been used as a test spot by Parks staff. Alberta Parks plans to use more of them. On mountain bike trails, their range is 30 km, which must be monitored closely. Since the bikes weigh in excess of 20+ kilograms, pushing one out of the backcountry is hard work. Eamon said the chain rings also wear out faster than normal, and some have even bent from the torque produced.

“Peter Lougheed Provincial Park just got some for use on the High Rockies Trail. That trail is 78 km long, so it is a lot to monitor. The Castle-Crown has also asked for specs. They want e-bikes, not quads,” Eamon said.

Eamon said the debate is very similar to one heard between skiers and snowboarders 30 years ago, and policies will continue to evolve. He scoffs at those who accuse e-bikers of “cheating.”

“I believe it’s closer to a bike. You still get tired, you’re still huffing and puffing,” Eamon said.