After what could charitably be considered a disastrous 2-13 start, the Canmore Eagles finally put together six periods of hard checking, swift skating, chance-burying hockey against the Camrose Kodiaks in what the team hopes to be the beginning of a
Oct 27, 2011 12:00 AM By: Rocky Mountain Outlook 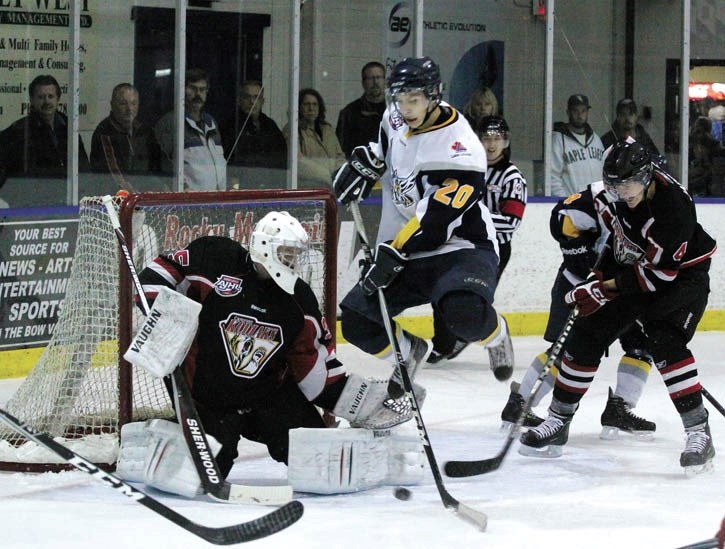 After what could charitably be considered a disastrous 2-13 start, the Canmore Eagles finally put together six periods of hard checking, swift skating, chance-burying hockey against the Camrose Kodiaks in what the team hopes to be the beginning of a turnaround.

Riley Reinbolt scored twice and picked up an assist to lead the Canmore Eagles to a 4-3 win over the Camrose Kodiaks, Saturday (Oct. 22) at Alex Kaleta Arena following the team’s 1-0 loss to the Kodiaks on Friday.

“We were good for six periods. Those younger guys are starting to figure it out. We stuck to the game plan, we were gritty. We played a specific way for six periods,” said head coach Andrew Milne.

Reinbolt and Canmore natives Luke Simpson and Simon Philp led the attack for the Eagles, who relied on gritty play and strong defence to secure the win. Camrose targeted Reinbolt Saturday after he scored two decisive victories in bouts over Kodiaks pugilists Friday night, however, the scrappy centre was not to be outdone.

“I knew they would come out hard, but I just tried to keep the energy going. The boys have been picking up the pace in practice and it showed on the ice,” Reinbolt said.

“This is his specialty. They went pretty hard after him. He wants energy and excitement on the ice and when that happens, he’s at his best. He knew tonight after beating up two of their guys the other night they were coming for him,” Milne said.

Canmore opened scoring on the powerplay when Simpson fired a shot on net that came out to Reinbolt, who rifled his second of the season into a gaping net.

Kodiak Warren Callis tied it up with a late goal in the final 17 seconds of the first period, which threatened the fragile confidence of the Eagles.

The home team came out aggressively, carrying the play for much of the second period. However, Camrose added the only marker of the period on a wraparound by Kodiak Ryan Huolt that eluded goaltender Michael Salmon on the short side. Canmore then lost captain Davis Claffey for 10 minutes after he was assessed a hitting to the head penalty.

However, in the third period, the Eagles’ tenacious work effort paid off. Reinbolt tied the game at 2-2 with a wicked wrist shot in the top corner to cap off an odd man rush. Three minutes later, the rugged centre set up Keegan Thompson in the goalmouth, who cashed in his own rebound.

Philp scored the insurance goal when he was found alone in the slot thanks to a nice feed from Thompson. Simpson picked up the second helper. The Eagles switched into a 1-2-2 defensive trap for the final eight minutes, giving up a goal, but holding on for the win.

“I knew we had enough to win, so we wanted to take away any momentum they had,” Milne said.

Salmon stopped 24 shots on his way to victory, and was solid when called upon while the Eagles offence got rolling. The team was without leading scorer Connor Hoekstra, who was serving the first of a two-game suspension due to a hitting from behind call Friday night against Camrose.

While the head coach has searched for answers through the first quarter of the season, he believes his team is ready for the next jump forward.

“Confidence is a tough thing to gain. When you’re a team that’s young and fragile, you make one bad play and it’s in the back of the net. It’s that calm, cool collected player who can instill that confidence that you need to step up. I think the guys on the back end have passed that on,” Milne said.

Justin Krabben and Davis Claffey were the calming presence against Camrose. The big defencemen were strong at both ends of the ice.

“Krabben was outstanding tonight. That was the best game he’s played for us all year. Davis played great too and they were able to show the young guys the way. I’m proud of the way guys stuck in there.”

The coach also had high praise for his young forwards.

“Simon Philp a key component on the penalty kill, and in the last three games, Keegan’s been awesome.”

The team also lost Steven Phee in the first period to injury, forcing the team to role three lines. If he goes on the injured list, he’ll join Jeremy Gordon, who’s out for six weeks with a broken wrist and Trey Phillips, who is out with a shoulder pull. Patrick Steel is also on the sidelines with cracked ribs.

The Eagles next home game is Nov. 6 against the Okotoks Oilers.