Focus on fun at rugby 10s 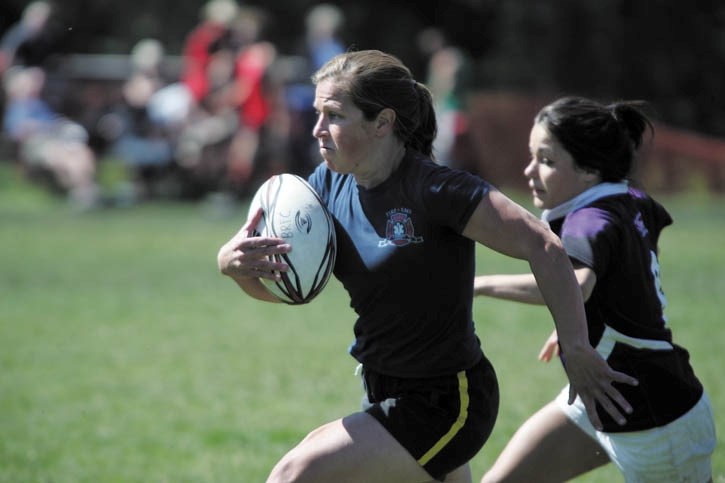 Leslie Barkhouse streaks for a try as the Banff Rugby women’s team competes in Saturday’s (July 30) 10s tournament at the Banff Rec Grounds.

For one weekend, rugby took on a completely different look in Banff.

Such was the pure dog days of summer scene at the Banff 10s rugby tournament on July 30 at the Banff Rec Grounds. Several costumed teams helped raise money for the local squad while meeting members from other clubs.

Seven teams took part in the 11th annual event on what proved to be one of the nicest days of the year. Scores were kept, but not taken too seriously, as the aim of the event was to build camaraderie between the teams – and raise a little money.

“Usually we have 10 men’s teams and four or five women’s teams,” said Kuiper. “We’ve had teams from Red Deer, Edmonton and even England in the past.”

Tournament organization was late this year, which contributed to the lack of teams, Kuiper said, but the spirit was high.

The Banff Men’s squad split into two and recruited a few players from Calgary, while the Banff women’s team had several Cowtown players on their roster as well.

Men’s player/coach Mark ‘Hoops’ Hooper said the event is all about creating a positive atmosphere and growing the camaraderie between rugby players.

“When the teams come down there’s plenty of good spirit,” Hooper said.

The event is also a tourist draw for Banff, Hooper said.

“For the community, it adds another dimension. Everyone comes to Banff for the beautiful mountains and the hiking and the camping. This brings people who wouldn’t usually come to Banff. Lots of import players who live in places like Red Deer and Edmonton come and visit, and then they want to come back,” Hooper said.

Banff entered two teams this year into the tournament and included several members of the provincial champion Banff High School team. They faired well against the bigger competition and Hooper said it is a great introduction.

“It’s a big step up from high school to men’s rugby, but this gives them a chance to play in a less intense atmosphere,” Hooper said.

The laid-back atmosphere suited the girls’ teams as well, said Young, who is still trying to recruit more players.

“Rugby can be so serious at times, so to just socialize and play fun rugby is rejuvenating for the girls,” Young said. “They also get to see how big of a sport rugby is.”

This is her eighth year competing in the Banff 10s tournament, and the atmosphere keeps her coming back.

“It’s great getting to know the other teams we play and just the bonding with the girls is fun,” Young said.

The women play their final home game of the season on Aug. 6 at the Banff Rec Grounds at noon against the Rams. The men’s team plays at 2 p.m. against CCIAC.