Maureen Kershaw has her priorities straight. The mother of Canmore’s Devon Kershaw flew in from Thunder Bay to greet her son in Calgary after his historic performance on the Tour de Ski, Monday (Jan. 10).
0
Jan 13, 2011 12:00 AM By: Rocky Mountain Outlook 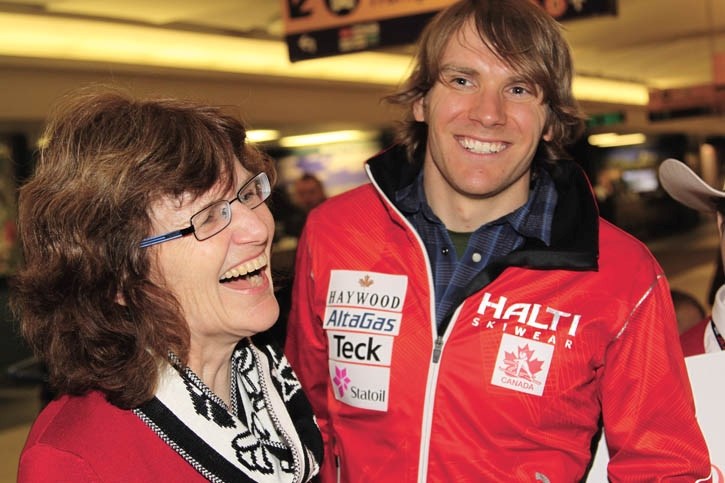 Maureen Kershaw has her priorities straight.

The mother of Canmore’s Devon Kershaw flew in from Thunder Bay to greet her son in Calgary after his historic performance on the Tour de Ski, Monday (Jan. 10).

“I thought someone should be here to greet him,” she said at the Calgary airport, making sure she got a hug from her son before releasing him to the awaiting media horde.

The sheepish champion skier obliged, a little embarrassed at the scene.

“To hit four podiums in 10 days is pretty surreal,” Kershaw said. “But it’s not like it’s never going to be done again. We have a really strong team.”

Kershaw captured a gold, two silver medals and a bronze on the Tour de Ski, a gruelling 10-day series of races across Europe over two weeks, patterned after the Tour de France cycling event.

While his skis, bags and awards were lost in transit back to Canada, a weary Kershaw and Ivan Babikov arrived at the airport to a warm greeting. With only his electric guitar in tow, Kershaw shyly thanked everyone for showing up and expressed his desire for his own bed.

Kershaw ended his medal haul three days prior with a bronze in Val Di Fiemme.

“I raced my best again and I finished on the podium. I have always dreamed of being on the world cup podium and winning a world cup race, so to be a part of it is amazing,” he told Cross-Country Canada.

Always quick to credit those around him, Kershaw said he had excellent skis all week thanks to his techs.

“We have a fantastic staff. Our tech staff work so tirelessly for us,” Kershaw said, noting his teammates have been the first to congratulate him. He gives plenty of credit to Alex Harvey for his performace. Harvey also spent most of the Tour de Ski in the top 10. As a 22-year-old.

“Alex Harvey is going to be far better than I will ever be in my career,” Kershaw said.

“For me, Justin has been instrumental in making the changes that I needed and it’s paid off,” Kershaw said.

“There are so many reasons why this has come together. I keep saying Justin has been a real asset to my training. He has changed me as a skier, but I think just the group of skiers I train with in Canada has been important. The competition is getting so good and we keep pushing each other to be better.”

He’ll spend the next three weeks in Canmore recovering, as he hasn’t been home in two-and-a-half months.

“I’m going to sleep pretty (well). It’s a gruelling race and it’s been a gruelling schedule. I’ll get back to training. The world championships are in late February, so I’ll do some recovery before then,” Kershaw said.

Those world championships have been a key goal for the team all season.

“Our expectations are the same as the Olympics: for someone to get at least one medal. I don’t care who it is. We have a really deep team. We’ve only had one world championship medal, so we’d like to add to that,” Kershaw said.

“Our team is definitely getting better. It’s important we can celebrate our victories together. The first guys to congratulate me were my teammates.”

Kershaw’s teammate and arguably second biggest fan (behind Maureen) Chandra Crawford is extremely impressed with the result. She skipped the Tour de Ski for training in Canmore, but got a chance to see Kershaw before he left Europe.

“What’s so amazing about Devon is his boundless energy and how deeply he cares about the team. He shows so much appreciation and respect for the people around him even though it’s an individual sport.

“He immediately gave credit for his big win to the ski technicians who slave away to get the boards running fast and our new coach Justin Wadsworth, who has done phenomenal things to bring our team to it’s most successful season since 2006,” Crawford said.

“Devon has worked the closest with Justin out of any of our guys and with a great partnership and their skill they are getting some very meaningful results for the team,” Crawford said.

Kershaw said he’s had four coaches in four years, and they’ve all helped him build up to such a strong result.

Crawford was stoked about the win.

“I’m really proud of him. I’m proud of his work ethic and passion for having a world-class team producing these breakthrough results. We’ve been together for eight years, so I’m clearly hugely biased, but I know Devon the athlete has worked really hard for a really long time… watch out world!” Crawford said.

Ivan Babikov was the top Canadian finisher in the final stage of the Tour de Ski, finishing sixth in the arduous nine kilometre climb up Alpe Cermis.