With the highly anticipated return of bison to Banff National Park expected early in 2017, Banff author and editor Harvey Locke has put together a new book that gives a more of a historical perspective to the conservation project.
0
Oct 6, 2016 12:00 AM By: Rocky Mountain Outlook 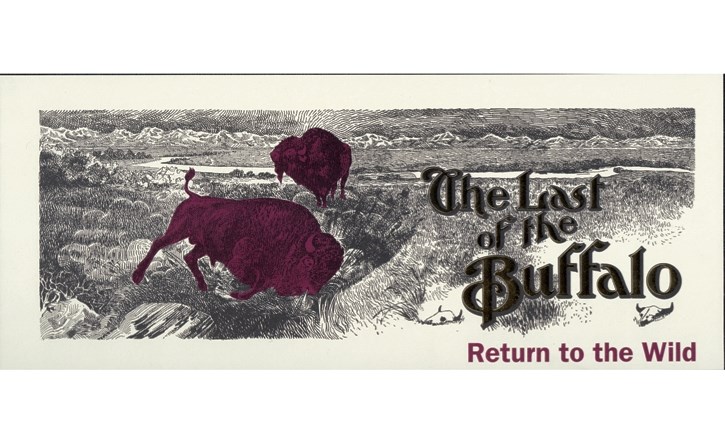 With the highly anticipated return of bison to Banff National Park expected early in 2017, Banff author and editor Harvey Locke has put together a new book that gives a more of a historical perspective to the conservation project.

The Last of the Buffalo, Return to the Wild, published by Summerthought, is a commemoration of the national park’s early role in successful efforts across North America to preserve bison as a species on its native range.

The book launch was timed with the historic meeting of the American Bison Society in Banff, along with the second anniversary of the signing of the Buffalo Treaty and the addition of signatories to that treaty, Thursday (Sept. 29). The conference and treaty signing was significant as Banff National Park is preparing to receive bison for reintroduction to the wild in the new year.

But to really understand the context of what it means to bring bison back to Banff, the history of the species, the history of conservation and its cultural significance is important and what the book The Last of the Buffalo Return to the Wild provides, thanks to Locke.

The stories of the buffalo from early European settlers put numbers of plains bison (bison bison) in the range of 20 million to as many as 70 million before their almost total extinction.

In fact, said Locke, at one point in time there were only 86 wild, genetically pure plains bison left in existence and of those few dozen of animals left, those animals were connected to Banff National Park in the late 19th century.

Locke said now, every single plains bison in North America has descended from those 86 bison, which were secured from an American rancher in Montana by the Canadian Government in 1907 and rounded up with the help of Banff’s own Norman Luxton and Rocky Mountain National Park Superintendent Howard Douglas.

That means, he said, the bison being brought to Banff in 2017 for reintroduction in the Panther River Valley are descendants of that famous conservation herd.

In his book, Locke details the history of conservation for plains bison, and that herd in particular, and the connection to Banff, as well as Luxton and Douglas. In fact, Luxton originally published a booklet called the Last of the Buffalo, which documented the preservation of the Pablo-Allard buffalo herd and the process to round them up in Montana.

The booklet is reproduced as part of the commemorative The Last of the Buffalo Return to the Wild and includes incredible photographs taken by Luxton of the herd. The challenge, explained Locke, is that nobody at that time had ever rounded up adult buffalo before.

The Last of the Buffalo Roam also offers up contributions by Locke, University of Calgary historian George Colpitts, archivist for the Whyte Museum Jennifer Rutkair, and Leroy Little Bear on the historic importance of the signing of the Buffalo Treaty in 2014, as well as the addition of signatories to the treaty from First Nations in Canada in 2015.

Bison were also extremely significant to Indigenous people in North America. Little Bear said for many First Nations people, the buffalo was central to their daily lives and deeply interconnected with their culture in every way.

That means Indigenous people are preparing themselves for the return of a relative that has long since been home to visit.

“With its near extinction, it was one of our family leaving home and now it is coming back and so the whole question among our people is what adjustments do we have to make?”

An academic and professor at the University of Lethbridge, Little Bear spoke and wrote in the book about the cultural significance of bison historically and today with the reintroduction of the species gaining momentum.

Colpitts offered up a contribution in the book that examines the historical context of plains bison as a species at the end of the 19th century when they were essentially hunted to the point of extinction.

He said the familiar narrative focuses on the post-Civil War hide hunt in the United States, when bison were hunted in massive numbers for their skin to produce cheap leather for belts in machinery that was driving the industrial revolution forward.

But the numbers of that hunt don’t add up, even for historians, Colpitts said during the book launch. The hunt may have contributed 7.5 million bison skins, but that doesn’t explain how an estimated 25 million to 70 million animals disappeared.

“Historians have turned to a number of disciplines to find out what happened to bison,” he said. “Historians now appreciate better the animal in its environment.”

Records of the climate in North America dating back to the 1400s – or the middle ages in Europe – show bison faced multi-decadal droughts on the Great Plains leading into the mid 1800s. The animal’s migratory patters, relationship with the scarcity-based great plains ecosystem in summer and eastern slopes river valleys in winter also played a factor in how bison were perceived at the time.

“Throughout the year, throughout its existence, the great plains bison, whatever the abundant resources in this region, faced times of critical scarcity and its resources were often limited to narrow a circuitry of scarce water or available winter grass resources,” Colpitts said.

The relationship with Indigenous people at the time could have also played a factor in the bison population leading up to its almost total demise, he said. That includes the introduction of horses to Indigenous cultures, making hunting of bison easier and changing the animal’s relationship with First Nations.

The Cheyenne and Sioux, for example, began to move into the plains and hunted bison with the help of horses. And those animals – including the feral horses – were also competing for scarce resources on the landscape.

The 1800s was a different time in North America when it came to ecology and wildlife – two terms that didn’t even exist until closer to the 20th century when society began to understand the interrelationships of living things.

“When bison were saved from extinction, the word ecology didn’t even exist yet,” Locke said.

Efforts at the time to save the species from extinction, then, didn’t take into consideration the fact that bison are a keystone species on the landscape.

But that relationship is something that has always been recognized by Indigenous people, Locke said.

Locke’s research for the book has also revealed more details of how the Pend d’Oreille and Salish people played a critical role in preserving the Pablo-Allard herd. A man named Walking Coyote has usually been credited for having originally captured the plains bison that eventually comprised the herd.

Locke said the book includes those new historic details shared with he and his wife, Marie-Eve Marchand, by members of the Flathead Indian Reservation in 2015.

The Last of the Buffalo Return to the Wild is available only in hardcover for $49.95 at the Whyte Museum gift shop in Banff or online at www.summerthought.com.