For a guy who used to be a one-man band, John Jenkins is really spreading the love around with a new project in the works. Golden, B.C.
0
Oct 8, 2015 12:00 AM By: Rocky Mountain Outlook 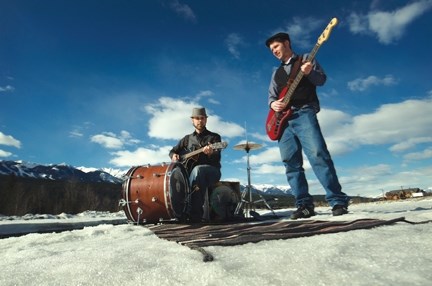 For a guy who used to be a one-man band, John Jenkins is really spreading the love around with a new project in the works.

Golden, B.C.’s Jenkins, a semi-regular visitor to the valley, put together a proposal and landed Columbia Basin Trust funding in order to get a new album under way.

Jenkins (vocals, guitar, kick drum) and Jackson Baker (vocals, bass) play the Georgetown Inn Oct. 8 and Nov. 19; in both instances, offering up some new folk works which will appear on the new album.

“Things are going really well,” he said. “Jackson and I have been writing new songs, re-writing some old ones and doing some touring.

“My grant was approved in June, so we’ve been coordinating, writing and rehearsing and I got a composition grant from the Canadian Society for Recording Arts. I’m hoping to go into the studio in January, get the album out to do promos this summer, then book festivals for the following summer.”

In keeping things local and spreading the joy around, Jenkins’ new album will be recorded at Bill Noble’s Strawbale Studio in Golden, while his Nanaimo friend Jordan Stringer, who mixed and recorded his last two albums, is also involved.

“It’s (Stringer’s involvement) exciting and crucial,” he said. “He knows my music very well and has a wealth of experience and knowledge. He’s a huge asset.”

Closer to home, one of Jenkins’ guitar students, Slade Coffman, 13, will also appear on the album. “He’s a very talented guitar player and I’ve been mentoring him with songwriting. At 13, he’s going to be a ‘session guy’ on the album.

“Part of the album project proposal was to provide mentoring opportunities and as an artist, there has to be some foresight and pre-planning on these things.”

Part of keeping things close to home is that Jenkins’ life has been closer to home since the birth of his son Elliot three years ago.

“There’s been a shift for me,” he said. “I’ve gone from extensive touring to doing more regional tours around here, in places like Invermere and in Canmore. Occasionaly, I’m gone two or three nights, but I stay closer to home these days.

“I’ve had a really great response from people in Canmore and the Georgetown has been great. I’ve been playing there regularly since last November and it’s one of my favourite places to play. On my Facebook page, I’ve got a video we shot at the Georgetown.

“Hopefully, we can rally some of the folks there we’ve met for when the new album comes out.”

Jenkins has toured and performed fronting many groups, playing festivals, concert halls, and bars of major cities and small towns. He has shared the stage opening for The Breakmen, Shane Philip, Shred Kelly, Tim Hus, The United Steel Workers of Montreal, Jenny Whitely, Ozomatli, and more, all the while maintaining the determination, dedication, drive, and endurance to survive solely on music.