Veteran musician Lori Reid will take to the Stan Rogers Stage, Sept. 17, as part of the Canmore Indie Music Festival. Now in its sixth year, Reid has played the festival several times in the past and welcomes the opportunity to return.
Sep 8, 2011 12:00 AM By: Rocky Mountain Outlook 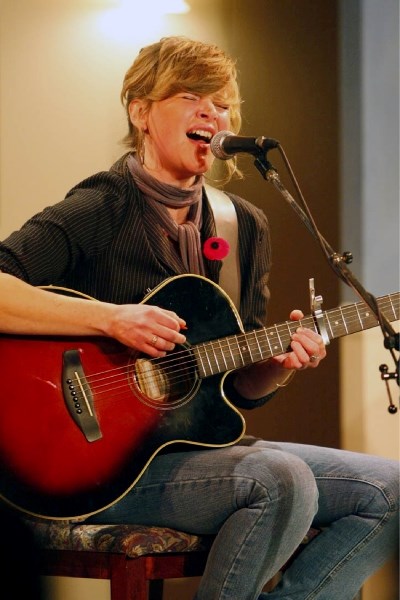 Lori Reid plays to a crowd assembled for a fundraiser at the Canmore Miners’ Union Hall.

Veteran musician Lori Reid will take to the Stan Rogers Stage, Sept. 17, as part of the Canmore Indie Music Festival.

Now in its sixth year, Reid has played the festival several times in the past and welcomes the opportunity to return.

“Indie means I’m doing everything on my own,” she said, in an interview at her home. “But it also means I’m doing things in my own unique way, I’m not attached to any specific way, it’s much more fluid. It means flexibility and freedom, so in that way I feel like I’m confident in who I am.”

Reid has been a professional musician for nearly a decade. Over the last eight years, she’s recorded three albums and toured extensively with The Fates, a Calgary-based trio of women singer-songwriters.

“Indie means being active, it means not sitting around waiting for a gig, but getting out there and playing,” she said, explaining her place in the festival. “It’s hard to find a place to play music in the afternoon in a small town – so I think this makes it accessible, it gives me an opportunity to share my music.”

The festival was founded and continues to be organized by Garry Gonis, a Banff bar manager and lover of indie music.

“Indie is doing it your own way, in a way that feels right for you,” said Reid. “I think that’s what Garry does – it may not be right for everybody, but for his lifestyle – with work and being active in the community, it stretches out in that way.”

Gonis has been a strong influence in Reid’s professional development as a musician, she stressed.

“He’s really encouraging,” she said. “For me, I’ve really struggled at times with trying to do music and he’s always been really supportive and encouraging, to the point where he’s made sure that I’ve had a guitar, that I had a place to play.

“Sometimes, as a writer or performer, if you don’t get out for a while, it’s hard to play again, and he’s always been there to give me a gentle kick,” added Reid. “I know I’m not alone, I’m not the only one he encourages in that way.”

As the festival is by donation, Reid has much admiration for Gonis.

“Garry’s a very supportive music person – I think he’s good for the community,” she said. “Having an accessible festival, for people to be able to come to it where it’s not a big deal, you just enjoy fresh air and people playing music.

“He does it all on his own, just for the love of it. The sound is quite nice and everybody is always so wonderful there; he generally recruits Banff Centre people, so I feel very privileged as a performer.”

The indie festival has more of a grassroots feel than the much bigger folk fest, she said.

“The folk festival is amazing, but this is something that’s much more grassroots,” said Reid. “Garry’s just starting out, and I don’t think he has big visions other than making music accessible and something to do on an afternoon in the mountains that’s authentic.”

Reid recorded her first solo album at The Banff Centre in 2003, which was followed by the three albums with The Fates.

“I’ve been a musician all my life, writing songs since I was a kid, and I just always thought I’d grow out of it one day, but I didn’t,” she confessed.

“I spent about a year writing and preparing,” she said. “We arranged all this equipment to bring in – old microphones and funky things to try and capture the concept – and it was done in two days.”

The album is currently being mastered and Reid hopes to release it later this fall.

“It is a concept album, about trying to find balance in constant transition,” she said. “It’s a little bit about how I was trying to live my life when I was on the road and trying to find stability and be who I am without feeling like I have to compromise something all the time, and that’s roughly what the concept is.”

With a folk roots sound, Reid plans on playing many of the new songs at the festival.