Meaghan Smith is headed west for a tour of Alberta. “I’ve only been twice, but each time, we’ve sold out,” she said in an interview from Halifax.
Nov 24, 2011 12:00 AM By: Rocky Mountain Outlook 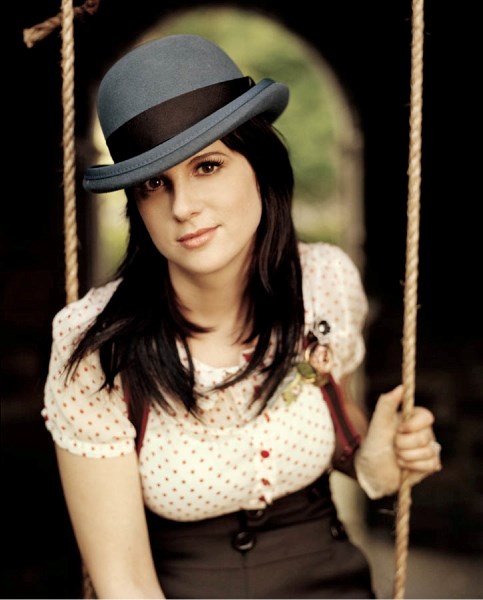 Meaghan Smith is headed west for a tour of Alberta.

“I’ve only been twice, but each time, we’ve sold out,” she said in an interview from Halifax. “I was so surprised, I was like ‘how do people in this tiny place know or care about me?’ But it’s really sweet.

“And I love the owners of Communitea and their food there – I want to go there to eat their Buddha Bowl, it’s ridiculously good.”

“I love Canmore, I just love it, I love the Communitea, and I said ‘before we book the tour, I don’t care where I go, I just really want to play Canmore, because it’s so sweet there,’” she explained. “When I go on tour, it’s just my husband and I usually, and it’s a lot of work to be just two people on tour.

“We’re carrying our own stuff around and driving everywhere and keeping track of everything, so it’s pretty intense for three weeks, and my evening in Canmore is like my treat to myself.”

The tour includes a lot of big cities – including Vancouver, Edmonton, Toronto and Montreal – and seemingly only one small town, Canmore.

“We have a really fun time when we go,” said Smith. “We’re in the midst of touring and I need a couple days off, so it’s a fun treat to keep myself going, and yes, Canmore is a small place and it’s out of the way, but it’s just one of those things I really wanted to do.”

Smith describes her music as being very eclectic and a real mesh of different styles.

“It’s very eclectic, there’s a lot of vintage elements, unexpected elements that I try to incorporate,” she said. “There’s a lot of electronic elements and programmed stuff, with horns over top and strings, and I like to mess around with juxtaposing modern and old things, modern sounding things with really organic sounding.

“I’m really not interested in reproducing a style of music, I don’t want to copy what’s already been done, so I’m really interested in messing around with computers and using loops and samples as instruments.”

Her first album, The Cricket’s Orchestra, was released last year and earned her a Juno award. Earlier this month, she released It Snowed, a Christmas album.

“It’s my favourite time of year and I really wanted to reinterpret some of my favourite Christmas songs and put them out there. So far, I’ve been hearing a lot of really good things.”

Her aim was to make a Christmas album which can be enjoyed by people who don’t normally care for such a style of music, she said.

“A lot of people really dislike holiday music and can’t stand it, and I’m with them – some of it’s really annoying – so I wanted to make a Christmas record that wasn’t annoying, that you could actually jam out to and hopefully like.”

True to the style of her first album, It Snowed is dominated by quirky musical arrangements.

“I did a duet with Buck 65 called ‘Baby It’s Cold Outside’ and him, in and of himself, is really full of contradictions, the tone of his voice against the tone of my voice, really is what I want to do, which is to make somebody listen,” said Smith. “And then on top of that we reverse the role, so he sings the girl’s part, and I sing the part that was written for a male, for a completely different twist and a new spin on the album.”

Many of the album’s songs are of the non-religious style of Christmas songs, but for the final track Smith went with “Silent Night”.

“For the last song on the album, I wanted to do “Silent Night”, which is a really traditional – some would say boring – kind of carol everybody has heard and might be sick of,” she said. “But I rented a vocoder (you sing into this thing and it splits your voice off into instruments like a guitar or keyboard and just sounds really crazy).

“The song “Silent Night” is about the scene of where Jesus is born and these angels showed up. If you’re a shepherd and you see a flock of angels, that’s a crazy thing, so I wanted the sound of the song to be trippy and a tiny bit creepy, but still really glorious and beautiful.”

Mixing odd sounds is the key to her style, said Smith.

“That’s how I get my sound, I try and mix things that shouldn’t go together; it’s all these things that are surprising and are going to sound interesting.”

As It Snowed only has seven tracks she can play, the Communitea concert will feature these songs and an array of her other work.

“I am going to be performing some tracks from the record, and some of my other songs, and all the while I’m going to be wearing twinkle lights,” she said. “It’s going to be pretty fantastic.”

Smith will be playing with just one other person, she said.

“I’m touring with my hus-band,” she laughed. “He’s my husband, and he’s my entire band.

“He plays guitar and has a bunch of crazy different effects pedals, and I play the omnichord and guitar and I sing.”

Unlike many artists who play the Bow Valley, who tend to be independent, Smith is signed to Warner Music Canada, a major record label.

“I made my own record and I got a few offers from major labels, and I went with Warner because they offered me the most fair deal and were enthusiastic and I liked what they had to say about their vision for developing artists,” she explained. “And then I won the Juno for Best New Artist this year, so obviously they’re doing something right to help me achieve my goals.”

To check out her music, visit www.meaghansmith.com