A carpenter’s dream, or possibly nightmare, Pine Tree Players’ new offering of Noises Off offers up a large cast, a lot of yuks and a manic stage atmosphere that could likely benefit from a traffic controller.
Nov 9, 2017 12:00 AM By: Rocky Mountain Outlook 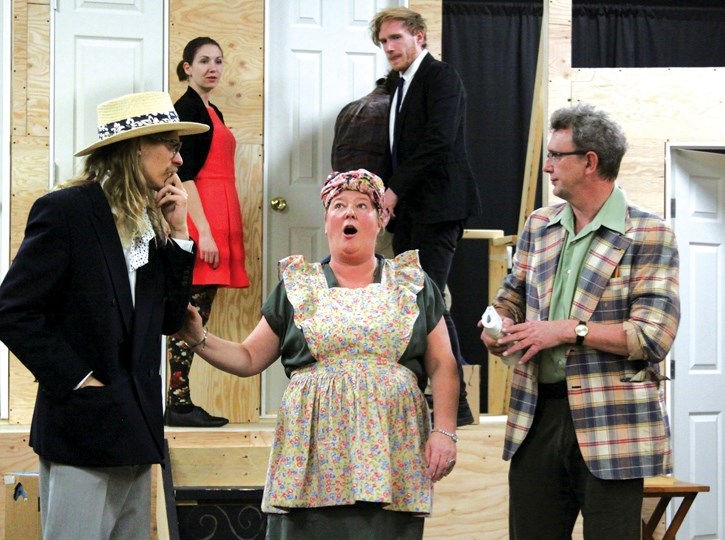 A carpenter’s dream, or possibly nightmare, Pine Tree Players’ new offering of Noises Off offers up a large cast, a lot of yuks and a manic stage atmosphere that could likely benefit from a traffic controller.

Noises Off, by English playwright Michael Frayn, sees a U.S. theatre company staging a British farce which has been dubbed the funniest farce ever written with many ensuing difficulties.

Act one opens with stressed out actors dealing with a badly written farce. Act two deals with goings-on back stage and the third act sees the intrepid cast trying to plow through the production.

“It’s a big show and it’s a tough show,” said Murray. “But it’s a show I really like and I’ve wanted to do it for about six years. It’s a play in a play and there’s a lot going on.”

Due to the large cast, complex plot and equally complex stage set, rehearsals for Noises Off have been going since mid-August and Murray said it feels like the cast is nearly ready for the public.

The set itself reminds one somewhat of the multiple doors and windows used in Arsenic and Old Lace, but it includes many more and, thanks to the technical wizardry of Deans and Jeremy White, the centre two-story section of the stage will pivot in place for the behind the scenes act two.

In all, much of the rather manic nature of the play results from the seven doors, a window, stairs and entrances and exits from the stage which results in a great deal of movement, door slamming and some confusion.

“It’s a very complex set,” said Deans. “With Arsenic and Old Lace, there were doors and windows, but they never changed. With this play, the stage moving for act two is a big change on stage.”

The moving stage and plethora of doors makes for not only a different feel for a PTP production, “but we found sometimes we had to shut down for a bit because everybody was laughing so hard. Rehearsals have been going really well.”

Prior to the set’s arrival on Oct. 21, rehearsals were done with chairs in place of actual doors, which provided some challenges to the actors.

Noises Off features some old hands as far as PTP goes, along with newcomers Burnett and Cherkas.

“I think it’s one of the funniest shows Pine Tree Players has done,” said Murray. “Usually a Pine Tree play starts getting ready in September, but this time we started earlier. We had some casting challenges and a Kim who should have been a Tim; we had a challenge finding another male actor, but it’s all worked out.”

At one point in the second act there is no dialogue – just actors, movement and axes while in the third act, there is a fall down some stairs.

Noises Off would be rated PG13, said Murray, who added there may be some F-bombs and sexual innuendo involved, though.

Michael Frayn was born in London in 1933 and began his writing career as a reporter at The Guardian and The Observer. Noises Off, which also became a successful film, opened at the Old Vic in 2012 and transferred to the West End, picking up a Laurence Olivier Nomination for Best Revival along the way.