Bow Valley theatrical talent will be under the spotlight Feb. 22-26 at the Canmore Miners’ Union Hall, with Pine Tree Players’ Wholly Comedy – A Festival of Four One Act Plays.
Feb 16, 2017 12:00 AM By: Rocky Mountain Outlook 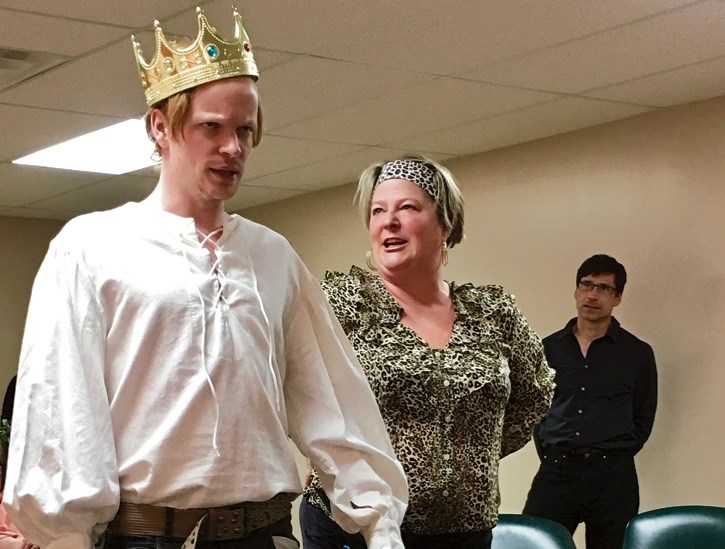 Jonathan Simpson as Claudius and Marilu Adams as Ruby during a dress rehearsal for Ruby of Elsinore, one of four one-act-plays to be staged Feb. 22-26 at the Canmore Miners Union Hall.

Bow Valley theatrical talent will be under the spotlight Feb. 22-26 at the Canmore Miners’ Union Hall, with Pine Tree Players’ Wholly Comedy – A Festival of Four One Act Plays.

Hamlet’s hairdresser, an innovative adaptation of a vaudeville play transferred to the Rocky Mountains, a sceptical saint who speaks to birds, and a town of 3,000 people overrun with 300 churches will be centre stage during this year’s festival.

Artistic Director Gerry McAuley hopes the success of the festival will allow the independence to continue and become a Pine Tree Players tradition. His vision this year was to keep it simple, have fun and attract new plays and people. The performance includes four modern comedic plays, including one devised by the creative team at Banff Theatre Collective.

“To be or not to be?” “Who Cares?” quips Ruby the hairdresser, played by Mari-Lu Adams as she delivers her comic take on Shakespeare’s tragic Hamlet while styling hair for a full range of dysfunctional characters from Shakespeare’s most famous play.

“Ruby of Elsinore is a comedy based on Hamlet and it’s dealing with Ruby, who is the hairdresser to the dysfunctional characters in Hamlet,” said McAuley.

“She has them all coming through her shop with lots of witty dialogue and the director is Nina St. James, who put a little extra physical comedy in with a good mix of new people and people who have acted before. One of the mandates for the one act plays is to get new people involved.”

Timothy Eckmier and the innovative and energetic Banff Theatre Collective rewrote the old classic vaudeville play Mad Breakfast and have transformed it into Out to Lunch, a creative, modern, devised theatre piece set in a quaint boarding house in the Rockies. Mistaken identities, dark secrets and hilarity ensue as each boarder confronts a visiting stranger.

“I was very impressed with the work of Timothy Eckmier, who started a theatre collective in Banff and has done some impressive stuff with it,” said McAuley. “It’s a vaudeville play he’s re-written and brought it to the Rocky Mountains, so I’m interested to see what that looks like.” said McAuley.

A curious take on religious history, featuring a beloved saint and his love of animals and nature forms the backdrop for David Ives’ play St. Francis Preaches to the Birds.

Prepare for anything as Ron Deans and his innovative cast present vultures feasting on saint innards and lively philosophical debates. It’s a wildly funny play about religion, death and Jell-O, complete with outrageous set and costumes. Deans also played an intricate part and helped in directing the last Players’ major production, God Of Carnage.

Can Butch avoid the taxman and get Charlie from out of his dark cloud? Find out in House of the Holy Moment by Cary Pepper, and directed by McAuley.

“The last play is House of the Holy Moment by Cary Pepper, and he’s thrilled because this will be the first time this play will be done in Canada,” said McAuley. “It involves a town of 3,000 with very liberal tax laws and everybody has declared themselves a church to avoid paying taxes.”