Rocky Mountain Rebel Music has returned to Banff, hellbent on playing the region’s ‘wildest’ venue. The eight-member reggae-ska-funk extravaganza will take to the stage at Wild Bill’s, Sunday (Aug. 21).
Aug 18, 2011 12:00 AM By: Rocky Mountain Outlook 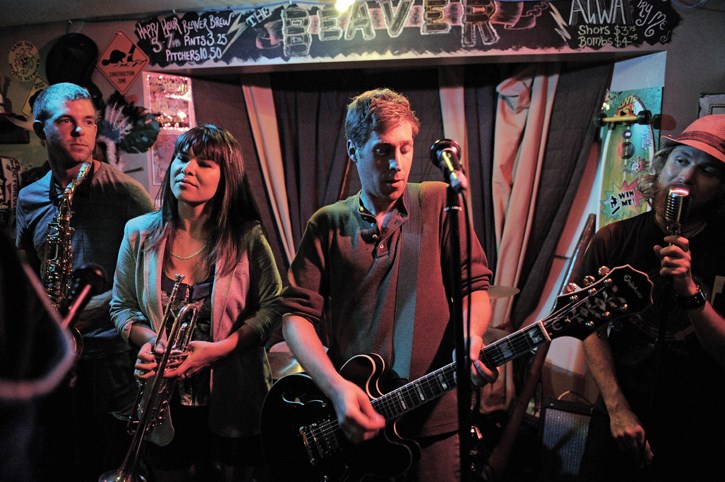 The eight-member reggae-ska-funk extravaganza will take to the stage at Wild Bill’s, Sunday (Aug. 21).

“We are normally a 10-piece band, though we’re only travelling with a tiny eight this tour,” he said. “We have a big sound matching up reggae and ska, and a little bit of rock and funk in there as well.”

This is the band’s fourth tour, which will take in B.C., Alberta and Saskatchewan.

“We’re doing 13 dates in 16 days and this is our first time playing Wild Bill’s,” he said. “We love Banff, we’ve played the Samesun Hostel before – we were here in February, and it was freezing.”

Currently based in Victoria, B.C., playing Banff in winter was a shock for the band.

“We’re not used to that kind of cold, but we’ve also played there in the summer and we love Banff, it’s great – great people at the Samesun,” said Horwood. “They treated us like kings, we had an amazing time there, and we’re excited to play at Wild Bill’s.”

The Samesun, however, is a very small venue and gets packed very quickly, he said.

“We’re looking for typically a bigger audience,” said Horwood. “And also, Wild Bill’s is the legendary saloon that’s pretty well known. I went and checked it out last time I was in Banff and I talked to Grant, and I’m excited to play there.”

That said, the band did play Samesun earlier this week, as it is on an erratic route, and will return to Banff this weekend for the Wild Bill’s show. A hectic schedule is fine though, he said, as the band loves playing live.

“We’ve played a lot on the island, but on our first tour we went all the way to Quebec City and back, which was pretty intense,” he said. “Basically, we are 10 musicians coming from different backgrounds all across the country and we even have a few from beyond.

“Our drummer’s from England and our keys player is from Brazil. I’m from Alberta, our singer’s from Victoria, and we have Ontario, so we’re basically from all over the place.”

Being an odd mix of individuals is what led to the forming of the band three years ago, said Horwood.

“I think the fact that we are an odd mix is what brought us together,” he explained. “Basically, people come to the city and it’s a little bit odd to meet people, and when you do meet people from out of town, you have a connection to begin with.

“We met through craigslist. The guitarist was looking for somebody to jam with and play bass, and it wasn’t any kind of official band thing. But then we were jamming with another keyboardist, and he met our singer accidentally at two in the morning when hailing a cab.

“They got to chatting about the style of music and our keyboardist said ‘Oh, we’re looking for a singer right now,’ that was a little bit of fate. And then gradually through people’s contacts, we went from three people to 10.”

Three years later, with an album under its belt, multiple tours and countless fans, Rocky Mountain Rebel Music is determined to strive even further.

“I feel very fortunate, being one of the three original people in there, and the two others are both very very driven and determined. They’re willing to sacrifice in order to make this work and most people in the band are that way,” he said.

“It also required a little trial and error, because altogether we’ve been through about 15 different musicians, and for one reason or another they haven’t worked out and that’s fine,” he added. “Now we’ve got a cast together that’s definitely able to do some things.”

When it comes to the show at Wild Bill’s be prepared for intensity, he stressed.

“With the 10 people, the thing we have to be careful of is to not make it too high energy, because it can get wild,” said Horwood. “We usually have to write our set-lists in a manner which gives people’s ears a chance to have a break.

“We tend to write intense – and our drummer absolutely loves very quick danceable beats – but we also balance that out with some slower, smoother, more dub stuff that allows people to take a break, get a drink, slow dance.”

For more info and to hear a bit of the band, check out their myspace page at www.myspace.com/rockymountainrebelmusic