Canmore stone carver Peig Abbott, relying on her art to make a living, knows well the battle of having to make art that sells as opposed to what she really wants to create.
Oct 14, 2015 12:00 AM By: Rocky Mountain Outlook 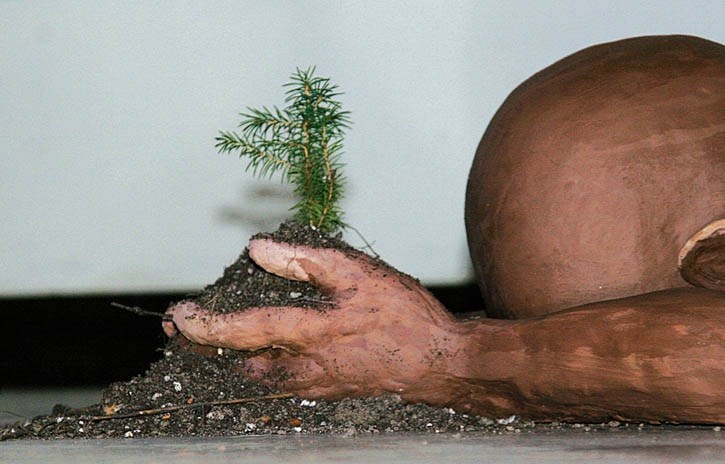 Canmore stone carver Peig Abbott, relying on her art to make a living, knows well the battle of having to make art that sells as opposed to what she really wants to create.

But the new One White Wall space, set up in Elevation Contemporary Art Gallery in downtown Canmore as part of the gallery’s 15th anniversary, gives artists freedom to do what they want to do, as opposed to what they think or know will sell.

“It can be a non-commercial space for artists to use to explore their creative ideas. In that sense too it is also a way for artists to challenge their vulnerability in terms of creating art, which I think is really important in the art-making process, instead of being stuck in the same old,” Abbott said Monday (Oct. 12).

“I’ve been looking for the ideal space and opportunity to show the second part of this installation.”

As a whole, Abbott calls this trilogy Remnants and she exhibited the first part in Halifax in 2003. Part one consisted of a larger-than-life unfired clay figure, lit with a single blue light, wrapped around a portion of a tree that had been knocked over when Hurricane Juan hit Halifax that same year.

“That exhibit showed me the value of art for the viewer, but also for the artist-creator. It showed me how art can be a reflection of the viewer’s own internal process or psyche,” she said.

Part two of remnants… (the 2nd Movement), which Abbott unveiled in the One White Wall space Oct. 10, features the life-sized figure – using the same clay used to make the first figure – holding an evergreen shoot in a ball of dirt and again lit with a single blue light.

The clay is unfired and the figure is allowed to dry, crack and crumble during the span of the exhibition.

Abbott said letting the installation decay invokes the sacredness of life and speaks to the concept of nature versus nurture.

Once her exhibition ends on Oct. 23, Abbott will break apart the sculpture and reclaim the clay and store it away until she’s ready to make part three of the trilogy.

“I’m really interested in the energy transference; the history of clay has an energy to it. As I make the figure, my vibration and energy goes into the clay and it becomes this essence. I’m really intrigued to see how this essence translates from the second piece into the third piece,” she said.

“The piece doesn’t exist beyond the show except in the memories of those who view it, ingest it and really engage with it on some level,” she said. “This exhibition allows me to revisit work I’ve done in the past, but explore it in a new form as well as put it out to the community and say ‘this work I also do.’ It allows the opportunity to share work that I’m not really known for.”

Abbott said once the trilogy is complete, she plans to take the clay into the forest and let it decompose, returning to the Earth.