“Some days I think I’m quite crazy because I live and breathe what I am doing right now and I have never found a better place for my soul.”
Oct 9, 2020 4:00 PM By: Cathy Ellis 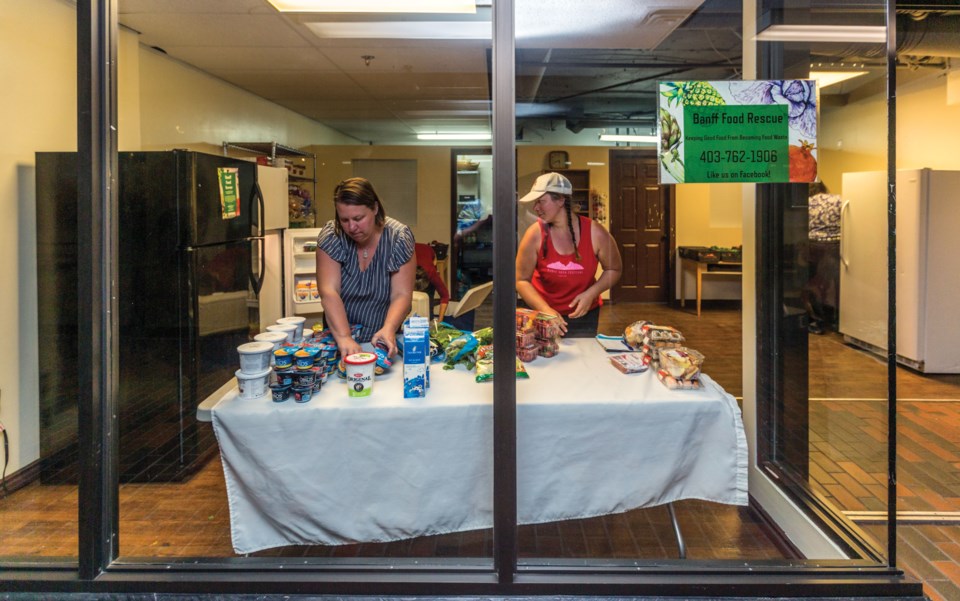 Volunteers set up a variety of different foods at Banff Food Rescue in the Sundance Mall in Banff. RMO FILE PHOTO

BANFF – Alanna Pettigrew is one of the best.

That’s according to the Rocky Mountain Outlook’s Best of the Bow readers' choice awards, with voters recognizing the founder and operator of Banff Food Rescue as the best volunteer in Banff.

“Wow! This is awesome. I love doing what I’m doing,” says Pettigrew, who was born and raised in Banff.

“Some days I think I’m quite crazy because I live and breathe what I am doing right now and I have never found a better place for my soul.”

What started in the basement of Pettigrew’s Spray Avenue home in 2016 to prevent perishable food from being thrown out as well as to help residents put food on the table regardless of their employment status has grown into a much bigger operation in the lower level of the Sundance Mall.

Banff Food Rescue became even more invaluable during the height of the COVID-19 pandemic, when the shutdown of Alberta’s economy in March to all but essential services and halted tourism in Banff National Park.

Unemployment in the early days was estimated as high as 85 per cent as many businesses had to temporarily close their doors, including the local food bank.

At the time, the local volunteer-run Banff Food Rescue became the main source of food for many people facing food insecurity.

Every day during the height of the coronavirus pandemic, up to 20 volunteers picked up and sorted food donated by grocery stores, food chain suppliers and local restaurants.

They also deliver family and individual boxes in Banff and Canmore.

“When everything was pretty much shutdown, we were seeng 230 people a night – that was just unbelievable,” says Pettigrew, noting the previous pre-pandemic record number of people at the door was 83.

“We had so many people lined up that I had to get pylons outside so that I could make sure people were spaced properly. It was certainly challenging, but it was also so exciting.”

In June, the Alberta Northern Lights Volunteer Recognition Program acknowledged Pettigrew for all the work she does with Banff Food Rescue, particularly during the COVID-19 pandemic.

She says her volunteer work is driven by her desire to help people.

“Caring about other people is super important and that’s something that’s been integral throughout my life,” says Pettigrew, adding that her mentors were her parents.

“I saw them involved in different ways to help other people who were less fortunate, or being involved in projects that would help the community as a whole.”

When she sets her mind to something, Pettigrew makes it happen – and that’s exactly what she did when she started the food rescue service out of her basement on Sept. 28, 2016.

Having worked at Safeway for about 20 years, she was saddened at the all food that was wasted and thrown out, perfectly good food that had simply reached an expiry date.

But it was about more than that for Pettigrew. It came at a time she felt extremely isolated, being responsible for the full-time care of her sister Nicole, who is disabled.

“I had the most amazing people come through my door and share what I have to offer,” she said.

“It also allowed me to get something out of it, which was to have these amazing, mostly young people come into my life and help me not to feel isolated.”

Pettigrew says she believes one of the hardest things for people to do is ask for help – and the food rescue service helps alleviate that.

“I think what this whole project does is it eliminates the need to ask for status, criteria, things that explain why you’re there,” she says.

“It takes away those barriers; there’s nothing worse than having to swallow your pride and ask for help, particularly for things that should be basic needs,” she adds.

“I just think this hits so many different things all at once – it isn’t all about food, but connections.”

Pettigrew wants to send her thanks to the many community partners who see value in what Banff Food Rescue does.

“I would encourage them to keep contributing with monetary donations, or in other ways, because we are trying to be sustainable,” she said, noting the organization wants to get sponsorship for a vehicle to help the program.

The Banff Food Rescue runs Mondays, Wednesdays and Fridays and there are also the occasional pop-ups.

More Best of the Bow