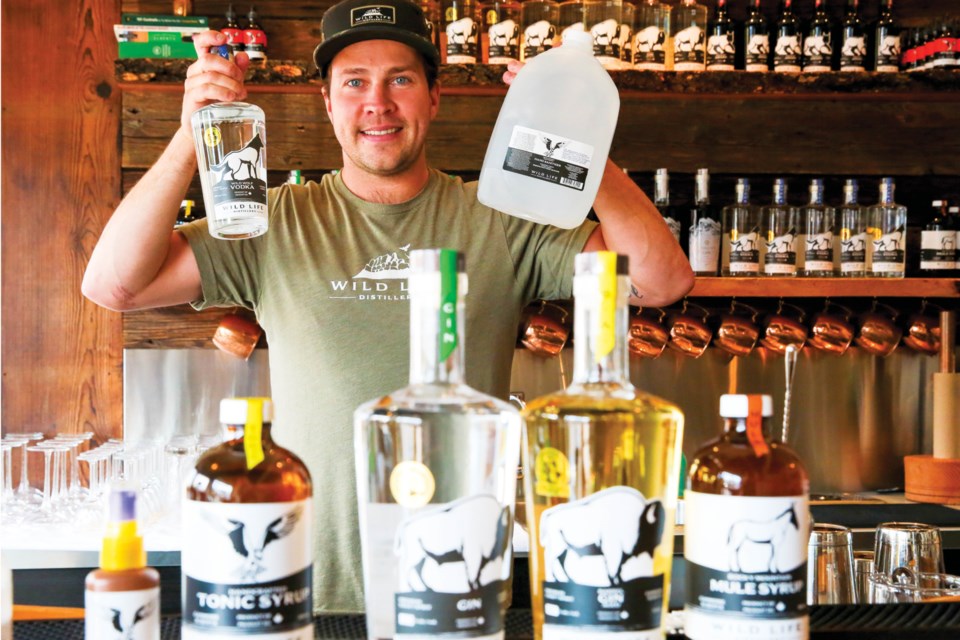 Wild Life Distillery co-founder Keith Robinson is “over the moon” after winning the best distillery and COVID-19 related product for its hand sanitizer in this year’s Rocky Mountain Outlook Best of the Bow readers’ choice awards. EVAN BUHLER RMO PHOTO⁠

In March, Wild Life Distillery became one of the hundreds of businesses in the Bow Valley that were forced to temporarily shut its doors due to the pandemic.

While the doors may have been closed to the public, the distillery carried on with its business, but in a way co-founder Keith Robinson never imagined.

When the supply of hand sanitizer disappeared off local shelves, Robinson said they decided to take matters into their own hands. The distillery started to produce hand sanitizer, and in turn, ended up creating the best COVID–19 related product in this year's Rocky Mountain Outlook Best of the Bow readers’ choice awards for Canmore.

The local spirit maker also took home the distinction of best distillery in Canmore, which is no surprise considering the numerous gold and silver awards it took home from the 2020 Canadian Artisan Spirit Competition for its vodka and gin.

“We are over the moon,” said Robinson. “We feel lucky to have been able to pivot and start producing hand sanitizer to help out the community with an essential product during a time of need.”

The distillery’s first batch of sanitizer was small and used their own distilled grain to produce the ethanol needed in the final product. Sourcing the glycerin, hydrogen peroxide and spray bottles was difficult in the beginning, said Robinson, as global demand was high.

Over time as the distillery was able to secure ingredients and bottling for the sanitizer, it ramped up production, and the demand followed from local businesses to food distributors in B.C. and Manitoba.

Robinson said the decision to produce sanitizer happened pretty quickly and since the distillery was set up to produce ethanol and package liquids, it was an easy switch.

“We saw other distilleries making the transition and we jumped on seeing as it was something we could do for the community.”

During the lockdown, Robinson said the production of Wild Life spirits did not slow down, but the demand for its vodka and gin did fall. As a result, the distillery was able to work on producing whiskey.

“We’re going to have a big kind of COVID-whiskey batch in three to three-and-a-half years from that time when we weren’t selling as much vodka or gin.”

It’s been three years since Wild Life opened its doors and the company is sticking to what it knows. Robinson said he does not want to stray too far away from the pure spirits they produce, with an emphasis on quality and building up to whiskey production.

Throughout the winter months, the distillery’s cocktail tasting bar will be open seven days a week, something Robinson said is vital to the success of the business.

“We want to provide an experience for people to really see Wild Life. We want to be more than just a bottle sitting on the shelf, we want to be something that people experience and remember.”

More Best of the Bow