In a statement released by Canadian Rockies Public Schools (CRPS) and Stoney Education Authority (SEA) Thursday morning (Jan. 30), it was announced that Indigenous Services Canada has agreed to continue funding Exshaw School for the next three years at current funding levels
Jan 30, 2020 10:26 AM By: Alana MacLeod 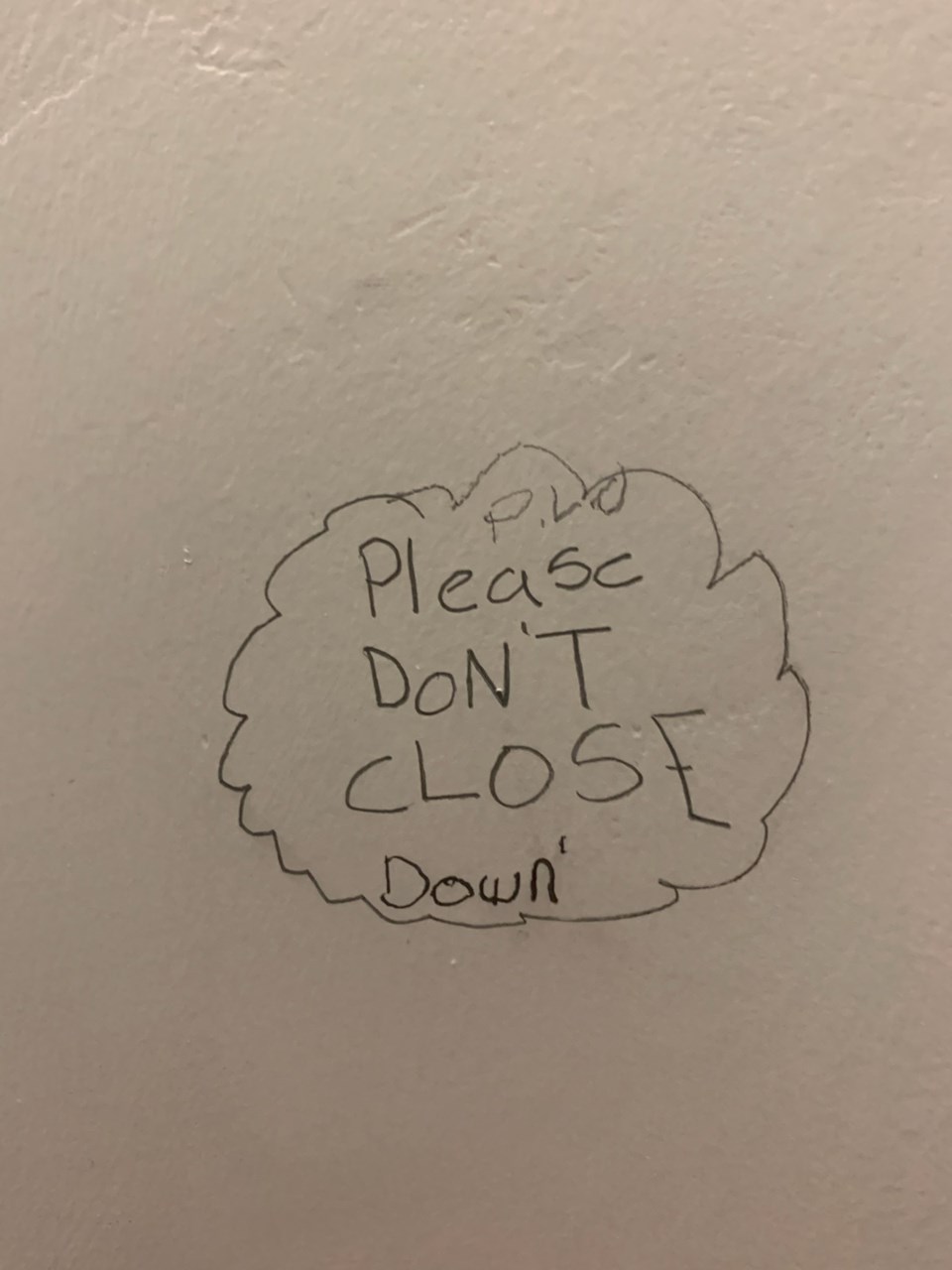 Graffiti found by staff in a washroom at Exshaw School. SUBMITTED PHOTO.

EXSHAW – After seven long months of uncertainty, Exshaw School has been saved – at least for the next three years.

In a statement released by Canadian Rockies Public School (CRPS) and Stoney Education Authority (SEA) Thursday morning (Jan. 30), it was announced that Indigenous Services Canada has agreed to continue funding Exshaw School under the current funding model over the next three years.

“Stoney Education Authority (SEA), Canadian Rockies Public Schools (CRPS) and Indigenous Services Canada (ISC) are pleased to announce that they have reached a three-year funding commitment that will benefit students,” the statement read.

“This commitment will enable Exshaw School to continue to provide a quality education to families from the Stoney Nakoda Nation who choose to send their children to Exshaw School. Additionally, the commitment will support students from the Stoney Nakoda Nation who attend other CRPS schools to continue on the education path they have chosen.

"SEA and CRPS can now begin to negotiate a modernized education service agreement during the three-years that the funding commitment is in place.”

The announcement comes after CRPS passed a motion to repurpose Exshaw School last Thursday (Jan. 23) after board members felt they were running out of time to make appropriate decisions for the next school year.

However, SEA and CRPS said senior administration would be recommending that the board rescind its motion.

“CRPS senior administration will be recommending that the board of trustees rescind its motion to move ahead with the repurposing of Exshaw School, at a special board meeting to be held on Saturday, Feb. 1, 2020,” the statement read.

"Making sure that the students attending Exshaw School, the vast majority of whom are First Nations, receive a high quality education is of the utmost importance to me," the statement reads.

"I am pleased to share that the Stoney Education Authority (SEA), Canadian Rockies Public Schools (CRPS) division and Indigenous Services Canada reached a three-year agreement that will benefit its students. This agreement will allow for stability while a modernized education services agreement is developed between CRPS and the SEA, ensuring Stoney Nakoda First Nation holds control over the education of their children.

"We will continue to work with all parties to support the needs and costs of students attending Exshaw School and to ensure theiraccess to a quality education."

“Exshaw School is home to nearly 200 First Nations students," Richards said. "The Liberals have terminated a 47-year-old agreement and cut funding for the students. The school’s left with an insurmountable $1.6 million shortfall and will be forced to close their doors if Indigenous Services Canada continues to refuse to work towards a solution.

“Why are they shutting the door on Indigenous students and the school they’ve chosen to attend?”

In addition, Minister of Education Adriana LaGrange and Minister of Indigenous Relations Rick Wilson wrote a letter to ISC in December concerning the potential closure of Exshaw School.

The saga has been ongoing since August when CRPS received a letter from ISC indicating it would be terminating a long-standing tuition agreement dating back to 1973. CRPS contacted ISC to try to understand how these changes would affect Exshaw School specifically, which has a 99 per cent Stoney Nakoda First Nation population. CRPS estimated the changes would result in a $1.6 million shortfall.

Since that time, CRPS has attempted to meet with the federal department to discuss the issue, as well as held community meetings with both Exshaw and the Stoney Nakoda community.

Officials with CRPS said the decision to repurpose the school last Thursday (Jan. 23) was a result of a lack of clarity surrounding funding numbers from ISC, which left the board in a precarious position. It could not budget for Exshaw School without knowing what the funding arrangement would be.

ISC, SEA and CRPS met Wednesday (Jan. 29) and finally came to an agreement that will benefit the nearly 200 students who attend Exshaw School.

Exshaw School to be repurposed after months with no solution from feds
Jan 24, 2020 4:00 PM
Editorial: Indigenous Services Canada should use Exshaw School as its new funding model
Jan 23, 2020 1:27 PM