The Eagles have seen improvements in their secondary scoring and penalty kill over the past three games
0
Dec 12, 2019 10:08 AM By: Evan Buhler 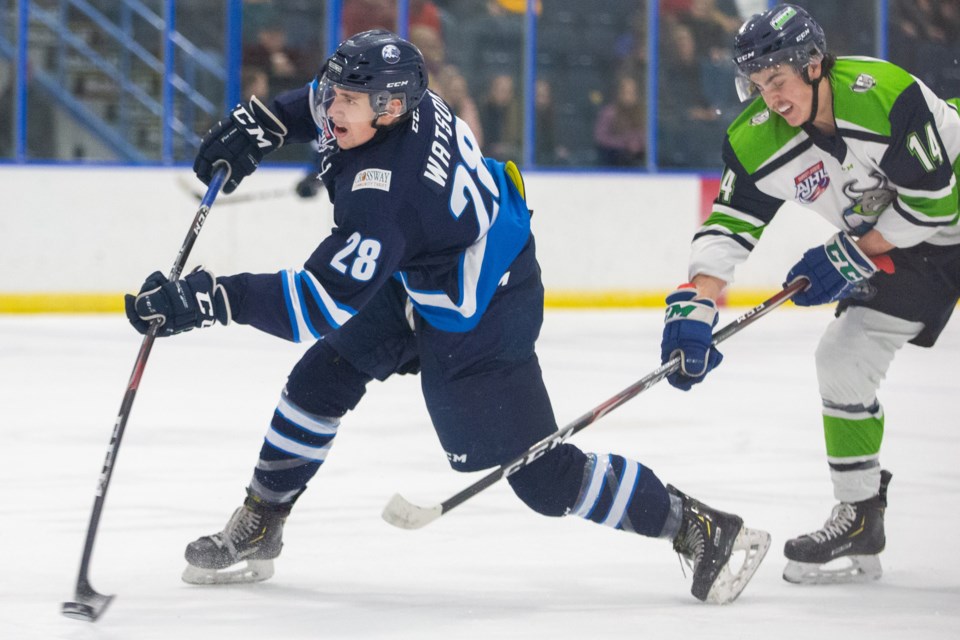 CANMORE – Following last weekend’s double header in Camrose, the Canmore Eagles’ returned to its barn and trounced the Calgary Canucks 8-1, on Tuesday (Dec. 10).

Eagles’ head coach Andrew Milne had high praise for his squad following the game, particularly the secondary scoring. Since Dec. 1, the team has been without its leading scorer Alex Young.

“There were some offensive opportunities out there and guys like Tristan Kimmen and Tristan Zandee stepped up and played really well tonight – arguably their best games of the season and they were rewarded for it,” said Milne.

The pair combined for five points on the evening.

Continuing to lead the way offensively for the Eagles has been joint leading scorer Connor Lyons. The Lethbridge native added five points to his total haul this season.

“We’ve been focused on scoring by community – everyone needs to chip in offensively. Obviously with Alex gone he drives a lot of our offence, but we’ve played pretty well without him and we have a few more without him so we just have to keep it going,” said Lyons.

In Camrose, the Eagles’ new signing, Mitchell Watson made his debut in a 5-2 win in which he picked up a pair of goals.

“I have a little more freedom here and I’ve moved up the rankings compared to my last team, which has given me more confidence to make plays and create chances,” said Watson.

Milne is pleased with the way Watson has transitioned into the lineup, noting that he has stepped up in an offensive capacity.

“Three goals in your first three games that’s going to help the transition, but we knew what we were getting into with him he’s such a character kid,” Milne said.

The Eagles’ offence is not the only area of play that has seen a recent boost. Their season-long struggle on the penalty kill has seen a noticeable improvement in recent games.

While the team is still hovering around the bottom of the league in penalty kill percentage, Lyons is confident it will continue to improve on the stat.

“We’ve been making it more simple," said Lyons. "I think guys were focused on too much out there and now we kind of dumbed it down a little bit. Now we are seeing guys blocking shots and really making sure they get the puck down the ice when they can."

The Eagles will return to action this Saturday (Dec. 14) when they host Drumheller at the Canmore Rec Centre.