Pine Tree Players (PTP) is putting a call out for directors of all experiences to start submitting scripts for productions in 2020
Jul 20, 2019 10:00 AM By: Alana MacLeod 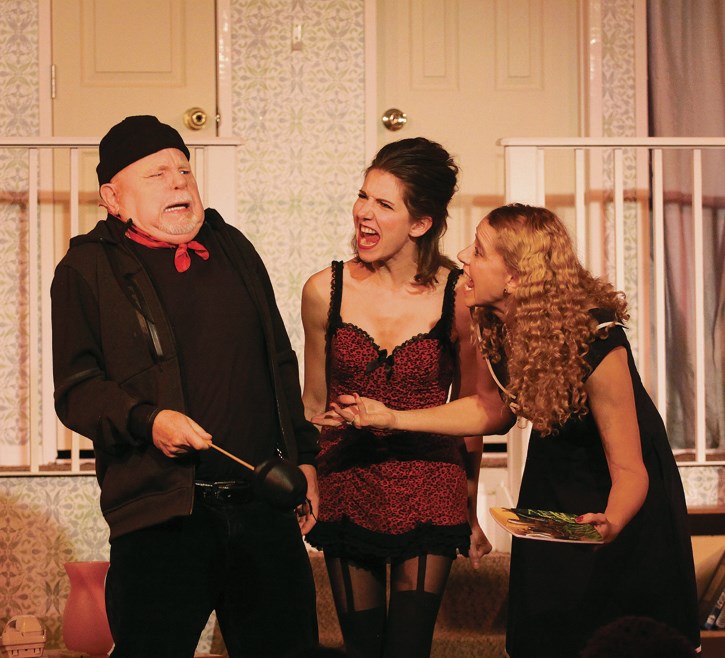 CANMORE – Is screaming the word "action" from a director's chair your dream? Well this may not be that opportunity exactly, but it is certainly the next best thing.

Pine Tree Players (PTP) is putting a call out for directors of all experiences to start submitting scripts for productions in 2020 and those who have directed for the theatre group before say it’s more than worth it.

Rob Murray, local radio host for Mountain FM as well as an actor and director for the theatre group, said the opportunity to direct allowed him to do “real dream projects.” Murray has directed PTP plays such as Noises Off, Lucky Stiff and Lend Me A Tenor.

“It’s been a really fantastic experience,” said Murray. “[They were] all scripts I wanted to do for a really long time and it was just really cool experience to be able to  cast a show with the people I thought would do really well with those particular parts and then watch it all come together … The satisfaction at the end, seeing it on stage, and all your hard work paying off with audiences laughing and having a really good time.”

This particular call for directors is a chance to have the experience Murray boasts about. There’s a variety of opportunities, whether experienced or just starting off, according to Jen Tweddell, PTP board president, who said the group is looking for roughly eight directors for four different time slots throughout 2020.

“We have a variety of different opportunities,” said Tweddell. “We’ve got outdoor theatre, we’ve got more traditional sort of two-act or full length plays, we’ve got one act plays and then we’ve got the artsPlace slot where we’re really flexible – we sort of encourage people –  if they’ve had a project they’ve been thinking of that doesn’t fit into any of our traditional slots, this is where it could go, [artsPlace time slot].”

Tweddell said the necessary experience is dependent on which time slot is being applied for. For example, their traditional spring and fall shows, time slotted in 2020 for April 15-25 and Nov. 18-28 at the Miners Union Hall, typically looks for experienced directors as the shows are usually full length. However, the One Act Play Festival accepts an array of skill levels.

“The One Act Play Fest – Feb. 2 to March 1 – you don’t have to have directing experience,” said Tweddell. “We’ll accept people that are first-time directors, but we do ask  people if they’re a first-time director to explain to us how they're going to bridge that knowledge and skill gap that they may have.”

She said new directors can either bring in a mentor to help them along, or bring in an experienced production team.

“If they’re not too sure who to ask to support them then they can also email us at info@pinetreeplayers.com and we can suggest different experienced directors that may be able to help them as a mentor ... We really just don’t want someone to come out for the first time and then kind of flounder without support – we want to make sure people are well supported, so they’re set up for success.”

If you don’t think you can do it, look to Murray, who said when he first directed for Pine Tree Players, his experience was limited.

“I didn’t actually have a lot of directing experience when I did my first show,” he said. “But I just tried to pick up on some of the things that I learned from other directors I’ve worked with, other people I’ve worked with and sometimes you kind of have to do that trial by fire.”

In fact, Murray said he learned a lot the first time he ever directed a production.

“The first show I directed was a musical and I had been in a lot of musicals before, but going behind the scenes, you really start to learn about everything else that goes into a stage show from the light and the costumes and makeup – all the behind the scenes stuff that really go into putting it together. It definitely gave me a new appreciation for theatre after doing it,” he said with a laugh.

When asked what the biggest challenge of directing is, Murray said he thinks it’ll be different for each person who takes on the task.

“I think everyone has their strengths and weaknesses. For example, I really like working on characters and timing with shows, but when it comes to what a stage looks like, the more artistic stuff, the visual arts part of it, that’s not my strong suit,” he said.

“I guess maybe the biggest overall challenge – it takes heart, it takes passion, it definitely takes time and energy. You have to be willing to do a lot of work outside of rehearsals to get it where it needs to be, but it’s totally worth it when you see that finished product on stage and you can say to yourself ‘I helped make this’ and ‘I’m helping audiences really enjoy themselves right now.’ ”

Anyone interested in directing is asked to submit three scripts as well as a resumé touting whatever theatre experience they may have by Aug. 31. Tweddell said after the deadline, a committee of five community members of all ages and talents with the youngest being 16-years-old, will then spend a month reviewing them. During this time, aspiring directors may be called to come in for a pitch session, or a clarification. The committee will then meet as a group for general consensus and then make its recommendations to the Pine Tree Players board members who will make the final decisions.

“We hope that we’ll select productions that are fun to be a part of, to produce as well as to come watch,” she said.

“The talent pool here for such a small community in the Bow Valley is amazing, so you really get to work with some amazing actors as well, which is fun.”

For Murray, a chance to work with the theatre group as a director is one that’s worthwhile.

“If it’s something you’re at all interested in, just give it a try,” he said. “Pine Tree Players is such a great organization because they’ve got such a great team of volunteers and people with experience, that if you need help in any way, shape or form, you can usually reach out to somebody in the organization and they’ll provide a resource to assist you … With Pine Tree, you’ve got a really solid team behind you, so it’s a great way to get into directing and know you aren’t going to be left hanging.”

For more information on Pine Tree Players, or to submit to direct in the 2020 season, visit their website. If you’re not looking to direct, but have a theatre itch you’d like scratched, the theatre group currently has a casting call out for their fall production Young Frankenstein. Visit www.pinetreeplayers.com for more information.